Behind the Lens: Diving Deep with Bottlenose Dolphins

Before joining Silversea Cruises as an Onboard Photographer, David Padilla co-founded a drive-in movie theater in Ecuador. He would travel the length and breadth of the country, screening movies to remote communities—many of whom had never seen motion pictures on the big screen. Young children and adults alike took inspiration from Padilla’s screenings. Before long, the young university graduate began collaborating with the Ecuadorian government on various projects, promoting Ecuador’s rich culture and educating the country’s inhabitants. Throughout this period of his life, the hobbyist photographer indulged two of his greatest passions: film and travel.

Three years ago, the Ecuadorian national embraced the opportunity to join Silversea in the Galapagos Archipelago, where he has been able to exercise his two passions once more; this time turning his lens on the islands’ extraordinary flora and fauna. Padilla has always had a love for Ecuador’s natural beauty. In his position as Onboard Photographer, Padilla is able to champion environmental conservation among the cruise line’s guests, while capturing unique moments on camera from his travels throughout the archipelago. According to Padilla, the opportunity “changed [his] life.”

Natural History, Frozen in Time: Those who have journeyed back into the prehistoric epoch that seemingly enshrouds the Galapagos will understand the uniqueness of the destination. The fauna of these 19 volcanic islands inspired Charles Darwin’s Theory of Evolution back in 1859, which hints to the extent of the region’s diversity. Each island has a distinctive topography, with remarkable geographical characteristics that discern it from the next. From solidified lava fields to lava-red sandy beaches, the range of features is varied and unending. The endemic animal species also attract travelers from far and wide, including the archipelago’s unusually abundant marine life, attracted by the Humboldt Current. Large predatory animals, as well as tropical fish and other spectacular marine creatures, flock to the beautiful islands’ shores. And so, it’s little wonder that the Galapagos Islands offer Padilla and Silversea’s other Onboard Photographers a breathtaking natural environment in which to exercise their talents.

“We dropped anchor off of Rabida Island—a landmass with a landscape as red as hot lava,” he begins. “We first took Zodiacs to explore the island’s fascinating ecosystem, following the designated hiking routes to admire how the Galapagos’ historic volcanic activity had shaped the landscape and created a rich variety of colors in the terrain. We were spotting the region’s fascinating birds—we saw Darwin’s Finches, Brown Pelicans and Blue-Footed Boobies, plus many more. I always take delight in sharing the various bird species with travelers and they always share my enthusiasm. But it wasn’t until we took to the water later that afternoon that that particular Tuesday became one to remember above all others.”

In the Theater of the Blue: The waters of the Galapagos teem with multi-colored schools of fish, from razor surgeonfish to clownfish, parrotfish, and angelfish, among others. Another iconic site seen only in the waters of the archipelago, the Galapagos green turtle is the only turtle species to nest on the islands, while Galapagos Penguins can also be seen here.

“From the moment I first arrived in the Galapagos, I’ve had an obsession with photographing the marine life of the archipelago. I’m fortunate enough to have experienced many remarkable places throughout Ecuador, but swimming here in the Galapagos made me feel like I was on another planet. I’d never seen anything like it: the abundance of marine life, the large sea-going animals, the unusual geological features that encourage you to explore. Everything was alien, yet incredible beautiful.”

In the Presence of Dolphins: Padilla’s unique moment in this corner of the Pacific Ocean was with a large, playful mammal species—the likes of which is glimpsed by few in the Galapagos. He describes the moment as “the holy grail of marine photography.”

“A couple of weeks prior to my underwater encounter, I had missed a special snorkeling opportunity. One of my fellow guides is a talented freediver and, using my GoPro, he had captured amazing footage of many dolphins, while I was back on the ship. I was heartbroken. As I had wanted to swim with dolphins for many years, I was determined to find another opportunity.”

An Attention-Grabbing Radio Transmission: “On this particular day, during a voyage throughout the North Central Islands, we spent the morning hiking and taking photographs of flamingos and other birds on Rabida Island, before my fellow guide Javier received a call on his radio.”

“A pod of dolphins is approaching the ship. There are loads,” rang the voice.

“I knew this was my chance,” continued Padilla. “We packed up and set off for the ship as quickly as we could. Silversea’s guests shared my excitement. I could feel the adrenaline pulsing through my veins.”

Slowing Down to Be with Nature: “When you are snorkeling, everything changes from the moment you descend underwater. It’s a completely different world; especially in the Galapagos. You move differently. You feel things differently. You think differently. This is what inspired me to learn to freedive. When you’re freediving, you have to relax and hold your breath. Too much movement consumes your energy, so you must remain still and lower your heart rate. At this moment, as I submerged beneath the waves into the blue abyss, it was a challenge to contain my excitement, but I was set on catching the shot of the animals for the first time in my life. I was connected with the ocean. And then I saw them in the distance. A pod of bottlenose dolphins.”

“I was underwater for just a few seconds at first, but it felt like an eternity. They were swimming around me—some were clearly mothers with their calves. I couldn’t believe it. I had never felt the emotions I felt during that dive into the deep. I used everything I had learned about freediving to be in the moment and to capture the best possible footage.” 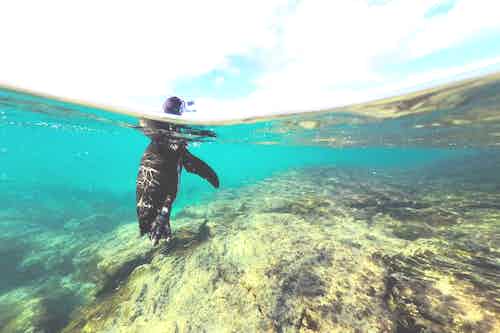 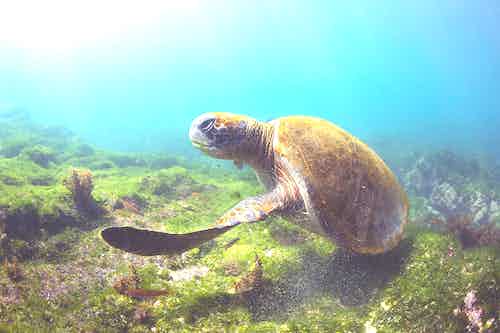 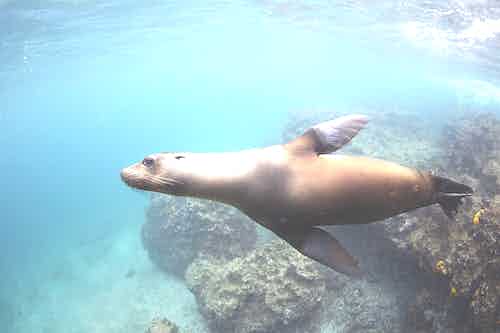 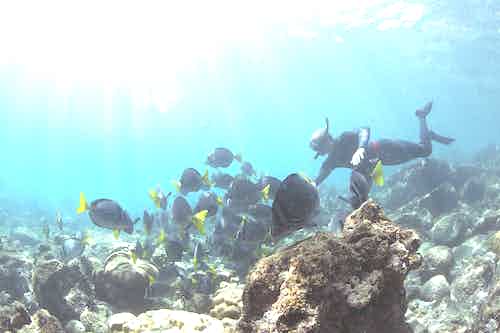 Filming Dolphins: “Animals move in an unpredictable way underwater. Their direction changes as often as that of the current. I knew dolphins were curious animals but I had never swum with them before. In order to capture my shot, I climbed back into a Zodiac and tried to guess their movements. I jumped into empty water with my Go Pro in the hope that they were swimming in my direction. It paid off. Within moments I was surrounded and they were swimming very close to me. They were circling me, curious about this stranger that had joined them underwater.”

“The dolphins started communicating in a language I had never heard before, but I somehow knew what they were saying. They playfully beckoned me deeper, into our shared habitat—the cool waters of the Humboldt Current.

My freediving training has taught me that all animals are very curious. It’s on us to be patient enough to let them approach us. I will never forget this moment, in which I was patient enough to swim with these dolphins. I felt at peace. I felt alive.”