Siddharth Pico Raghavan Iyer, better known as Pico Iyer, has written more than a dozen books and his work has been translated into more than 20 languages. Born in Oxford, England to Indian parents, Iyer has traveled nearly constantly for more than 70% of his life. Yet one place had eluded his vast and comprehensive list of destinations: Antarctica. Traveling aboard Silver Cloud in January 2020, Mr. Iyer crossed the White Continent off his list, a destination that he will not soon cross off his memories.

You once wrote: “We travel, initially, to lose ourselves; and we travel, next, to find ourselves.” How did you both lose and find yourself in Antarctica?

I really felt I lost myself by being transported into views of such silence and purity and calm that I forgot all my worries and distractions and chatter, and was returned to my better, most quiet self. I’ve been traveling, almost constantly, for 45 years now, since I was in my teens, and I can remember very few places, if any, as humbling and serene as Antarctica: day after day, my wife and I would walk up to Deck 9 in the morning and look out across what looked to be noiseless continents in every direction, with barely a trace of human habitation.

Antarctica was bigger, in that sense, than any landscape I’ve seen, including Alaska and Namibia and Mongolia, and it was impossible not to lose oneself in both the grandeur and the hush. Which meant, I think, that I found myself, too, in the sense of finding that better, deeper, more spacious self that’s lost when I’m rushing from one appointment to the next on the freeway and fielding ten e-mails an hour.

What struck us both on this trip—even though I’ve taken five cruises before—is how attentive and quiet every one of our fellow travelers seemed to be: so often there were quite a few of us in the Observation Lounge, just holding our breath as a member of the Expedition team pointed out whales or penguins or even dolphins by the side of the ship.

As a travel writer, being a cultural outsider is often a key element. How did it feel to encounter a place where humans are the ultimate outsiders?

I loved that sense, because, at some level, we always felt like insiders in Antarctica—right in the heart of everything around us. For many of us, I think, one of the wonders of the trip to the southernmost continent is seeing how one can walk amidst colonies of 20,000 penguins, and the endearing birds just go about their business as if no human were there—walking past us, busily on their way to the ocean, fluffing their wings and guiding their chicks and just standing beside us as if we were part of their community.

And when we rode around Pléneau Island and other places in a Zodiac, we were encircled by beauty: on every side of us were scenes as uplifting and beautiful as I have seen anywhere on this planet, so we never had the sense of being outsiders, or alien to the world around us.

The third element that really made us feel at home in this majestic setting was that, for example, the man who took us out on our very first Zodiac tour, Federico, had actually lived in Antarctica once and had been spending much of his life there since 2008. So we really felt as if we were witnessing even the human element from within, as it looks to one of the lucky handful who spend all four seasons there. And when Federico gave lectures on board Silver Cloud, we learned (and saw) all the details of what it is to be a resident of this sublime continent.

Why should people visit Antarctica?

First, because it puts one in place, reminds one of how much larger the elements are than we puny humans, and expands our sense of wonder. Every grand natural landscape does this, from Tibet to Ethiopia to Patagonia, but I’ve never felt myself so small and so awestruck as when surrounded by miles and miles of snowy mountains and emerald icebergs and penguin rookeries and gleaming sapphire-jade water.

The second reason to go there is that it’s impossible to be there and not to be reminded how precious our planet is and how essential it is that we look up from our screens and protect an environment without which there’d be no us. I was moved by the idea of Antarctica Ambassadors that the Expedition crew shared with us: to go there is instantly to want to be sure that nothing destroys those glaciers and no fishermen deprive the penguins of their krill. Nature, over thousands of millennia, has established a balance and an order—more apparent in Antarctica (a kind of trans-human landscape) than anywhere I’ve been.

When you experience that even for a few days—and see what the earth would be like with almost no human intervention—you come home determined to work for the preservation of such purity.

What is one piece of advice you would give to anyone dreaming of cruising to Antarctica?

Throw out every expectation. Both my wife and I had certain ideas of Antarctica before we arrived, fashioned out of images from polar expeditions and notions of endless deserts of snow. So we were stunned to find how varied it was, how much grander than our conception of it, and how much warmer.

It’s good to come prepared with lots of warm clothing and scarves and gloves, and it’s good to know that the 36-hour trip across Drake Passage isn’t always smooth (though now you can fly over even that stretch of water if you like). But part of the beauty of Antarctica is that so few people have been there, and we know so little about it, that almost everything we imagined before we got there proved to be much smaller than the reality.

How did traveling with Silversea enhance your Antarctica experience?

I hardly need to say how remarkable the Silversea experience is. I had taken four cruises with a different company before I boarded my first Silversea vessel, and even on very large ships I had found the service to be excellent, the food tasty and the whole cruise-experience remarkably comfortable and friction-free.

But Silversea sets a whole new standard when it comes to impeccable service (right up to breakfast-in-bed and glasses of fine wine and canapes and staff members ready to serve you, as they did us, with non-alcoholic Singapore Slings and exquisite roast duck); and of course the fact of being on a very small ship means one never feels crowded or harassed. Often my wife and I had the whole of Deck 9 to ourselves.

What’s special about the Antarctic trip, though, is a captain who knows just how to steer through choppy waters so as to avoid most turbulence (and how to change course for thirty minutes so we can watch pods of 50 orcas gliding past). And, most of all, an Expedition staff that will do everything, from guiding you by the hand across a penguin colony to taking fifteen pictures of you in every kind of light, to ensure your experience is as rich as possible.

When we took a Zodiac around one harbor, the person steering the craft was a botanist, pointing out lichen and nests made out of fishing lines from the 1930s; when we took another Zodiac around some translucent, otherworldly icebergs, our guide was a firefighter who had spent two years living in a remote Icelandic town, and could tell us how the Arctic compared with the Antarctic.

Being on an expedition cruise, what struck you as the most interesting moment onboard?

Again and again there’d be an announcement over the public address system in our cabin that a pod of whales or something remarkable was on view at the prow of the ship. We could often watch all these surprise visitations from the huge terrace outside out suite; but sometimes we’d go to Deck 5, where the crew had opened up a special door so passengers could stand in the best possible positions and get astonishing views of the animals, while sipping the prosecco that waiters handed out.

And although I have given lectures aboard a Silversea ship, I’m not always a lover of lectures. But on this cruise I tried to attend every lecture available because the historians and scientists who were part of the Expedition Crew had such specialized knowledge to impart, in ways that any layman could follow. To take one example, we had a Ph. D. ornithologist on our cruise who gave a fascinating lecture on the birds of the area soon after we boarded. At every stop, we would find him on shore all day, ready to point out things of interest and to answer every question (Do penguins mate for life? Which other birds are most likely to attack them? How old are those chicks? Is there infidelity among penguins?). And at the end of the cruise he gave us another lecture, which we could follow with new attention, having spent four days walking among the penguins.

You were accompanied by your wife on this voyage. Does a cruise of this magnitude allow for bits of connecting vacation experiences with a loved one? What were they for you?

If my wife were answering these questions—she’s here beside me in our apartment in Japan, still glowing from the experience—she would say that Antarctica was one of the best shared experiences we’ve had in our 32 years together. Her workaholic husband couldn’t spend more than a few minutes each day answering e-mails, and didn’t want to. When we were at sea, and the winds came up, we just stayed in our cabin and watched wonderful movies together and ordered in some of Silversea’s rightly famous filet mignon, to go with the bottle of champagne we’d been given.

Every evening we received a table for two by the window—and we hadn’t quite worked out before we arrived that, in the southern summer, the sun doesn’t set till long after 10:00 p.m. (and rises before 4:00 a.m.), so we could look out at the silver light and take walks together for 18 hours a day.

Sometimes, we’d read side by side on the couch; often one of us would see a whale next to the ship and call the other out to the terrace; we could tramp across snowy slopes next to one another in the afternoon and then dress up for dinner and share what we’d experienced over celestial desserts and lobster salad. 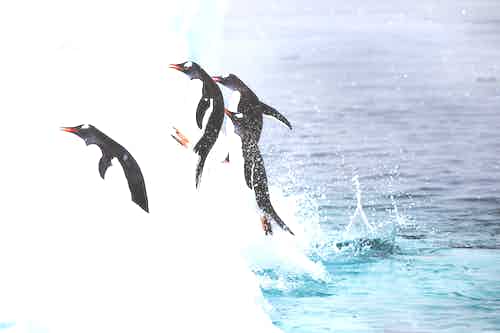 We’re actually both quite urban creatures, so we didn’t know how we’d get on in the midst of such uninterrupted nature. But the joy of a Silversea trip to the Antarctic is that you enjoy natural splendors beyond any you’ve seen every day, on your excursions each morning and each afternoon, and while just walking around the ship; and the rest of the time you enjoy service, gourmet food and comfort beyond anything I’ve known in a lifetime of five-star hotels.

Antarctica is wilder than I’d expected, and much less rough; much vaster, but also more intimate; and more inspiring and surprising than anything I’ve seen on cruises around the Mediterranean, across the Baltic States and through the Inside Passage in Alaska. I know the two of us will be sharing memories, images and stories of it till our final breath.