Packing Your Photograph Equipment for Antarctica? Use Our Checklist

“I think a photograph’s quality is determined ahead of the flash,” says Lucia Griggi, as she unpacks a large lens from a much larger carry case. “If you’re intent on getting amazing images in polar regions, it’s all about the preparation.”

Earlier this year, Griggi returned from two months in Antarctica with many memory cards filled with striking photos. For our upcoming trip, she is traveling with various cases full of cameras, lenses and accessories, but, as she removes and unfolds a surprisingly large tripod, she assures me it’s possible to travel lighter.

“Especially when traveling in a region as remote as Antarctica,” she tells me. “You need to think carefully about your pack list. While it’s important to prepare for unpredictable conditions, you also need to consider the weight of your pack, as carrying too much equipment can work against you while on an expedition.”

A device occupies each plug in the room. Flashing green lights illuminate her preparatory routine. As if sharing a secret, she begins to list her favored equipment for an expedition to Antarctica.

What to Pack for Antarctica?

“If you are a serious photographer and you want to return from Antarctica with high-resolution, high-quality images, you’ll want a top-end, mirrorless, interchangeable lensed camera or a DSLR with a variety of lenses,” says Griggi.

“My workhorse camera bodies are the Canon EOS 5D Mark IV and the Canon EOS 1D X. Both cameras have full-frame sensors and very low noise. The 5D is primarily for landscapes and situations where I don’t need the 14 frames per second of the 1D X, which is my go-to camera for wildlife and action.”

Whatever style your camera, be aware that LCD screens are hard to see in the bright conditions of Antarctica. “The icy setting may be beautiful, but its reflectiveness plays havoc with the light. You’ll find that having a hood for the viewfinder is a great advantage,” says Griggi, as she directs her lens towards the window as if she’s spotted a breaching whale or diving bird. “A hood becomes an extension of your eye, allowing you to precisely see what is framed in your photo without any glare.” 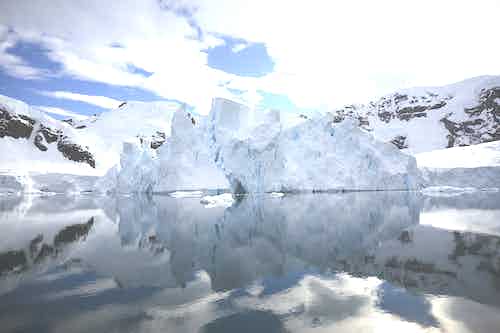 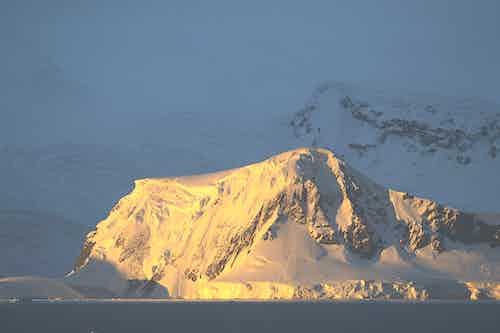 How about creative control? “I strongly suggest that your camera at least has ‘Program Auto’ among its settings. For additional creativity look for aperture and speed settings,” says Griggi.

“I also carry a Sony A7SII for filming and snapshots, but this is by no means essential.”

“While camera bodies are important, the choice of lens plays a greater role in determining the quality of your shots when in Antarctica,” Griggi says.

“Your lens selection is a personal decision. It usually comes down to how much weight you’re willing to carry and how much money you’re prepared to spend. But that’s not to say you need to spend a small fortune to leave an expedition with the photos of your dreams.

With a point-and-shoot camera, you don’t need to make such decisions, as the lens is built in. If you carry a digital SLR with a full-frame sensor, I suggest a range of lenses from 24mm to 300mm. My camera bag holds a 16-35mm zoom, 70-200mm zoom and 300mm fixed lens with a doubler that transforms the lens to 600mm. I do, however, still love my prime lenses for their sharpness and simplicity,” says Griggi, as she begins cleaning her 85mm and 24mm prime lenses with a microfiber cloth, somewhat ritualistically. She’s perfected the skill.

“The Pelican Series 1510 hard case is on wheels, which is useful for passing through airports. I also use it when doing Zodiac tours out on the water because it’s practically waterproof. You can close it in a second if the spray picks up. It locks down and everything would be completely fine if we get wet. My second carry-on bag is a SIRUI UrbanPro Camera Backpack. These two bags carry all my essential gear, and they stay with me at all times,” says Griggi.

“When it comes to the tripod, the most important consideration for travel photographers is size and weight.” Griggi demonstrates how her trusty Benro TMA38CL Long Series Carbon Fiber Tripod, which weighs slightly less than 4.5 pounds, folds to just 24 inches. It really is quite impressive. By this time, the room is filled with equipment – all of which has emerged from only two bags.

“For ease of use, I’ll pair this with a Benro BV6 Small Ball Head and quick-release plates. I also travel with a Benro Monopod for shooting from the deck of the ship and a Bucky travel pillow which I use as a beanbag,” she adds.

After raising the question, I learn that the greatest challenge posed to photographers in Antarctica is the weather. While it doesn’t rain there, strong winds can blow ice, resembling the sensation of precipitation. “There can be ethereal light and photo opportunities but also wet and windy conditions that could put your camera and lenses at risk,” warns Griggi. “When it comes through, it comes through very quickly. The wind blows the snow all around, and it’s practically impossible to shoot when storms actually hit.” Griggi uses a number of accessories to overcome the challenging conditions.

“I use OP/TECH rain sleeves or rain shields, but I don’t really like them because they can interrupt your shooting technique. In the past, I’ve also used a trash bag or plastic bag. It’s easier to grab and throw over your camera, and then you make a hole at one end and put the lens part through and then tie it up. As unprofessional as that sounds, it’s actually more manageable.

If your camera lenses accept filters, I highly recommend UV or skylight filters to protect them from being scratched, as you wipe away smudges, dust and salt spray. These filters do not affect the quality of your images,” Griggi insists. “Aside from the protection factor, their former purpose from the days of film has been rendered obsolete, since the sensor in your digital camera is already treated with multiple coatings that filter UV light.”

With each accessory, our host gains enthusiasm. We now enter the deepest recesses of Griggi’s knowledge, which she shares keenly.

“There are a few other items that I don’t leave home without,” she continues, “like extra batteries. I always triple check that I’ve packed two battery chargers. I double up everything, and I always carry what I need in my hand luggage. I also tend to have at least six batteries already charged in my backpack, mainly because the cold in Antarctica will alter battery life. Always carry extra fully charged batteries.”

Griggi also carries at least two card readers and five memory cards with her on an expedition, especially one with such dramatic scenery as Antarctica. “I generally carry 64GB memory cards instead of 128GB. I don’t like to store too much memory on one card just in case it corrupts, so I would rather change the cards out more often. But I would fill a 32GB card too quickly, especially shooting as much as I do. I tend to overshoot.” I get the sense Griggi has memorized her entire pack, as she recites her equipment list as if rehearsed.

“For shooting on the go, I find Black Rapid Camera Shoulder Straps to be a comfortable alternative to standard camera straps,” Griggi adds. “While not the most fashionable, fingerless gloves are useful while operating a camera. They provide great dexterity. But these gloves do not replace larger, warmer, waterproof gloves for general use, as it can be bitter cold!

For experienced photographers, a polarizing filter can be of great benefit to enhance photographs. Just as polarizing sunglasses cut the glare on a sunny day, the polarizer eliminates unwanted reflection on windows, water and leaves. It also improves contrast and color saturation.”

Now, camera equipment fills every space in the room, but Griggi insists that a lighter expedition is possible: “Just remember that you can scale down with less equipment. However, I would suggest doubling up on accessories when possible, just to be on the safe side!”

Ahead of the arduous task of packing away, Griggi adds one last point, going back to basics: “Bring your manual, especially if you’re not familiar with the art of photography. They offer some valuable advice on settings.”

And with that, she pulls out her own camera manuals, which have sat untouched in her bags for years.