The Most Christmassy Place on Earth Just May Be the Philippines

It is early December as I write this, and although I won’t be home this year for the Filipino Christmas I grew up with, I know that holidays are already underway there – and have been for weeks.

Not even the world’s finest Christmas capitals – in Europe, Scandinavia, or the Baltics, New York City or North Pole, Alaska – can lay claim to the longest and, arguably, the craziest Christmas celebrations in the world the way the Philippines does. This archipelago of 7,600 islands and 110 million people is the most populous Christian nation in Southeast Asia, but its history also may play into the supersized yuletide celebration that has become part of who we are.

For Filipinos, Christmas isn’t just a day or a week in the year. It is a season in the truest sense of the word. What may seem to some as nonsensical is truly a time that embodies the Christmas spirit with helpings of joy, gratitude and special connections, despite the hardships and challenges the country faces. And who wouldn’t want to hold on to that feeling just a bit longer?

The roots of fascination

It is said that Christmas came to the Philippines in 1324. Father Odorico, a Franciscan missionary from Pordenone, Italy, survived a shipwreck and brought the joy (and expense) of celebrating the birth of the Savior to our shores, predating Spanish colonizers by two centuries. A marker at St. James Parish Church in Bolinao, Pangasinan, in Northern Philippines, says it is the place where the first Christian Mass and the first Christmas were celebrated.

But it wasn’t until the Spanish conquistadores christened the nation “Las Islas Filipinas” in 1543 that the unique holiday traditions of the Philippines began to take root, then flourish. The colonizers replaced early religious customs with Catholic pomp and circumstance, so feast days of saints and special days in the Christian calendar added 19 holidays celebrated each year in the Philippines.

Our exceptional tropical Baroque churches, scattered throughout the islands, still observe Catholic Christmas traditions, including some of the more archaic ones

One of the better-known is the pre-dawn Misa de Gallo,or Mass of the Rooster, or Simbang Gabi, held in the nine days leading to Christmas. Filipinos believe that if you complete all nine Masses, a wish may be granted.

If that’s not enough to get you out of bed, the fragrant steam from rice cakes wafting from a lineup of kiosks outside the churches will. Two kinds of Filipino rice cakes, the buttery bibingka, cooked golden and fluffy, topped with grated coconut, cheese and salted duck egg slivers, and/or the purple-hued sticky rice fingers called Puto Bumbong usually make their culinary appearance. 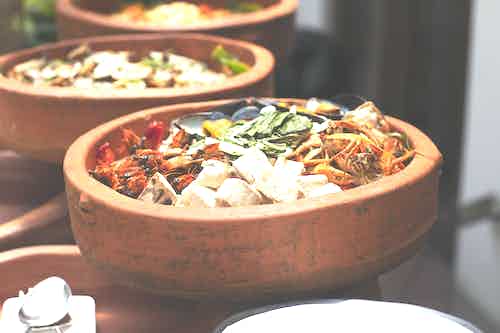 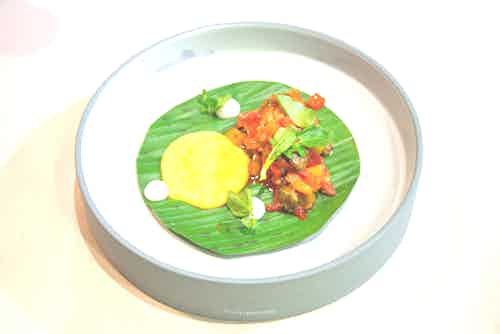 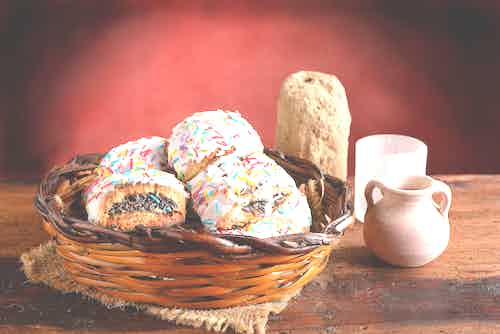 Load up on them with some tsokolate-eh, the thick espresso-style local hot cocoa, or tsokolate-ah, the thinner version of hot chocolate, or try a spicy salabat, fresh ginger tea.

Night owls, on the other hand, may find seasonal joy in midnight Christmas sales, which begin in October. Malls and bazaars around the country deck their halls for expanded shopping hours and shoppers will find discounts on items that make great Secret Santa office gifts or items for school gift-exchanges. And if you’re a last-minute shopper, the extended hours may have your procrastinating Christmas shopping self as well.

Star-shaped lanterns, called parols, make the standstill traffic and checkout lines a little more bearable. These unmistakable symbols of Filipino Christmas have their roots in the Star of Bethlehem, which shepherds and the three Magi to the manger.

Many an elementary school turns the creation of these paper stars into craft projects, which can be tricky and messy but ultimately meaningful ways to bring Christmas into classrooms.

For a more polished look, leave the craftsmanship to the experts, and visit the city of San Fernando in Pampanga, about 40 miles north of Manila, is worth the visit. Here, each village creates its finest versions of parols, made from welded steel braces and colored mother-of-pearl faces, wired to create a spectacular Christmas light experience for Paskuhan, considered the Philippines’ biggest Christmas destination.

For a more polished look, leave the craftsmanship to the experts, and visit the city of San Fernando in Pampanga, about 40 miles north of Manila, is worth the visit. Here, each village creates its finest versions of parols, made from welded steel braces and colored mother-of-pearl faces, wired to create a spectacular Christmas light experience for Paskuhan, considered the Philippines’ biggest Christmas destination.

Filipino Christmas traditions also create a longing for home. About 1.7 million Filipinos work abroad, and after a year away from family and the familiar, about 180,000 return home for the holidays, where they can finally satisfy their cravings for Filipino holiday recipes made this time of year:the crispy crackle of lechon (suckling pig) or a spit-roasted pork; the sweet and savory embutido,  a steamed meatloaf; the caramel-coated leche flan; the festive purple deliciousness of ube halaya, or purple yam jam.

The centerpiece of Noche Buena, or the Christmas Eve dinner, is the succulent, pineapple-glazed Christmas ham. Hosts spend days preparing it with its traditional side dishes, including pansit, or stir-fried glass noodles; lumpia, a crispy, fried vegetable and pork roll; a macaroni salad (Pinoy, or Filipino, style, with a sprinkling of raisins), or the kid-approved Filipino spaghetti (more sweet than savory). T

The heirloom recipes take on a special meaning for those who have been away from the dinner table a year or more. The food is satisfying, as is the completion of the family circle.

And as the new year begins…

For many Filipinos, a proper, traditional Christmas celebration culminates Jan. 9, when the country marks the Feast of the Black Nazarene. Thousands flock to the Quiapo basilica in Manila to honor the dark-skinned wooden image of the Savior, carved by an anonymous Mexican artist in the 16th century. The image, brought to the Philippines in 1606, is said to have miraculous healing and prayer-granting powers when touched, such that, through the years, the tradition has spurred legions of devotees.It’s a worthy end to Filipino Christmas.

Despite its colonial roots and its current, commercialized nature, Christmas in the Philippines is, for most Filipinos, a time of happiness, hope, heritage and homecoming. The country is no stranger to historical, social and environmental oppression, but Filipinos are resilient. Is there a better reason or time to highlight our genuine hospitality and our eagerness to share our delight in family and love of community?