A pair of beady eyes breaks the water’s surface, as the warm tropical air gently pushes waves against the green mangroves. It’s difficult to ignore the butterflies in my stomach when the Zodiac moves closer to these huge reptiles in the wild, which can grow up to 20 feet (6 meters) long. Slowly, the piercing eyes return to the depths of the Hunter River in Australia’s remote Kimberley region, offering little clue as to where they’ll pop up next.

The Hunter River, or “Yirinni” as it is known to the Wunambal Gaambera people of Western Australia, is a 20 mile long (30 kilometers long) stretch of bottle-green water that teems with ancient Aboriginal rock art sites and an abundance of wildlife. Accordingly, it’s one of the best places to see these saltwater crocodiles in action. “They are a feature of the Kimberley,” says Silversea Expedition Expert Malcolm Turner. “Nearly every guest on a Kimberley cruise sees one. The more you are out looking, the greater the chance of seeing them.”

Why Kimberley’s Saltwater Crocodiles Have Returned

Travelers to the Kimberley can witness firsthand how saltwater crocodiles—or salties, as they’re locally known—hunt and thrive in one of the most isolated and remote regions on the planet. “We often spot crocs basking ashore, and we usually get to watch their behavior as they fishing for food along the mudbanks,” says Turner.

Guests have ample opportunity to watch these reptilian relics grab a fish or mud crab and then raise their heads out of the water to swallow the catch. “These crocs are not used to people, so they are not scared or shy, and we can drift close enough for magnificent views and photos. They’re always excited and impressed to see a wild crocodile acting so naturally close by.”

In the Kimberley, the population of saltwater crocodiles has been growing since hunting was banned. Since 1969, when three previous decades of unregulated hunting had driven down numbers across the Kimberley and the Northern Territory to less than 8,000 individuals, the reptiles have been protected in Australia.

Exact Kimberley crocodile numbers are unknown. But a paper published by the Western Australian Marine Science Institution in 2017 suggests that the Hunter River has a density of around five crocodiles per square kilometer of river. “Based on this survey, the health of crocodile populations in the greater Kimberley can be considered ‘very good’ with no natural predators, good water quality and an abundance of food,” the researchers concluded.

Saltwater crocodiles aren’t the only animals thriving in this area, however. At low tide in the dense mangrove communities in Porosus Creek, a tributary of the Hunter River, the trees loom from exposed mud, balanced on woody roots like ballerinas en pointe. It’s not unusual to spot a fiddler crab, partially hidden among the dark green mangroves and mudflats, waving its bright-colored claws, or a mudskipper hauling itself across the sticky earth.

“A cruise through the Kimberley offers scenery, geology, Aboriginal culture, wildlife and remote wilderness,” says Turner. The mangroves that line the river are a bird watcher’s paradise. Look closely, and you might spot the shy, yet glamorous, Azure Kingfisher. Look up, and there’s an enormous Great-billed Heron. There are extra points for those who can pick out the elusive and spectacular Chestnut Rail, otherwise known as the Kimberley chook. “The guests love the wildness of the coast, and the fact that they see no permanent settlement for the whole Kimberley coast and very few other travelers,” he states. “Coastal wilderness is rare in the world today.”

Despite cruising this river around 40 times, Turner never tires of the experience, mainly because it always changes with the seasons and offers a chance to see new wildlife. “And I enjoy seeing the new guests get excited about the Kimberley and developing their curiosity about the natural and cultural wonders of the place,” he adds.

With so much wildlife living amongst a background of towering sandstone cliffs, the Hunter River is an incomparable sight for enthusiastic photographers. Golden-hued cliffs, sprawling mud banks and mangrove forests typify the landscape that has remained mostly unchanged since before the first dinosaurs set foot here. 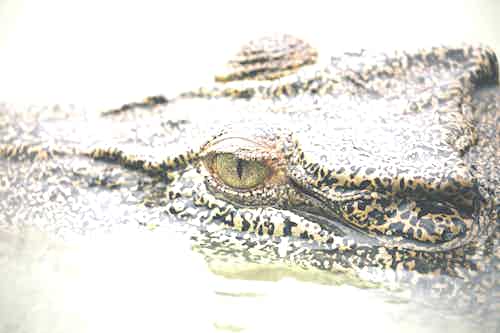 Let’s Get Enriched: Damon Ramsey Dishes on Reptiles of the Northern Australia Bush

No doubt, the scene today is the same as that witnessed by British explorer Phillip Parker King, the first European to reach the Hunter River in 1820, who named it after his companion Lieutenant James Hunter, a naval surgeon. “The rocks in the Kimberley region are nearly two billion years old and carved by climatic forces into the landscape scale formations of gorges, buttresses, and islands,” explains Turner. “On a smaller scale, the rocks are carved into a variety of shapes and textures by wind, water and temperature.”

According to the beliefs of the Wunambal Gaambera people, the two extraordinary stone formations that mark where the river mouth empties into Prince Frederick Harbour are said to depict “wunggurr,” the creator snake, to the east and a kangaroo to the west. But now that the saltwater crocodile population has rebounded, they’ve resumed their position as unofficial guardians of this dreamy waterway.