Nevis, Lovely Nevis: A Day with the ‘Queen of the Caribbean’

With a healthy dose of imagination, I can see why the Spanish chose “Nuestra Señora de las Nieves” (Our Lady of the Snows) as the name for the decidedly non-wintry island of Nevis. Legend has it that they were inspired by the thick wreath of clouds that shrouded the isle’s 3,200-foot-high peak when they first sighted it more than five centuries ago. Today’s sight was no different as I approach the Nevisian coast from a tender off Silver Whisper, the first step of our day in Nevis on a Silversea-organized shore excursion. The oval-shaped, 36-square-mile island appears to rise abruptly from the Caribbean Sea, Nevis Peak’s summit hiding behind the “snowy” clouds.

The Spanish Nieves would eventually become Nevis, which since 1967 has been the smaller sister of the Federation of St. Kitts and Nevis. Though not readily apparent by the island’s name, Nevis endured British rule for centuries. This legacy becomes much more obvious in our landing site, Charlestown, a typical West Indian town crackling with commercial activity. Like several other examples across the former British Empire (including the similarly-named Charleston, South Carolina), the 1,500-resident Nevisian capital was named after King Charles II of England.

But as soon as we disembark, it’s evident that another historical figure has eclipsed Charlestown’s namesake. A large, arched slogan greets us at the pier: Welcome to Nevis – Birthplace of Alexander Hamilton. The American statesman and face of the US$10 bill was born less than 400 yards from where we stand, and his legacy looms large over this island with or without the success of Lin-Manuel Miranda’s Broadway musical. Might as well call it ‘Hamiltontown.’

What to do in Nevis? Ask Smoothie.

We are also greeted by our local guide. Lester is a proud Nevisian whose enthusiasm helps me shake off the lull caused by the rocking motion of the short tender ride. He welcomes our group to a day in Nevis with a hearty good morning sprinkled in with a dose of island idiosyncrasy and humor. “My mother named me Lester, but everyone calls me Smoothie,” smiles the affable ambassador, before elaborating on the common Caribbean tradition of assigning quirky nicknames to just about everyone. Why Smoothie? “It started as a nod to my musical inclination – the smooth verses of my lyrical compositions,” he explains. “But it also refers to my goal of providing our guests a smooth visit to Nevis.” He then gleefully informs our group of explorers that on our first stop we will visit the house of his friend and neighbor, “Alex.”

A hop, skip, jump and very brief history lesson/trivia session later, we arrive at a Georgian-style, two-story house of stone walls and green doors, partially shaded by a massive royal poinciana tree. Originally built in 1680, we are told by Smoothie that the original structure was destroyed by an earthquake in 1840. More than two centuries later, it was restored to the building that today boasts the distinction of being the island’s most visited attraction and a highlight of any day in Nevis.

“Hamilton House,” as the locals call it, officially serves two purposes. The first, housed on the ground floor, is devoted to the past in the form of the Alexander Hamilton Museum. A small but fairly comprehensive exhibit chronicles the life and times of the first secretary of treasury of the US from his modest, out-of-wedlock birth in 1755 (or 1757; even Hamilton himself wasn’t sure) to his untimely death at the hands of then-Vice President Aaron Burr in Weehawken, New Jersey in 1804.

The second purpose is housed on the building’s second story and is focused on the present and future of the Caribbean island. The off-limits hall, visible only through a pair of windows if they happen to be open, is the meeting space for the eight-member Nevis Island Assembly, the local legislative body.

Beaming with pride, Smoothie accentuates the significance of having the important political discussions and decisions take place in the birthplace of the island’s most storied and distinguished politician. “Alex was and will always be one of us. His accomplishments have made all Nevisians proud,” he tells me while whisking us away to the second stop of our tour.

A walk on the lush side

Long before European colonization brought Nevis its modern-day name, the native Kalinago or Caribs called this island “Oualie,” which roughly translates into “Land of Beautiful Waters.” They were certainly on to something: seven natural freshwater springs are found in Nevis, as well as several ravines that become powerful streams of rainwater washing down from the central highland towards the shore. Indeed, the “snows” of Nevis Peak are a constant reminder of the island’s wild, steep interior. And during our day in Nevis, our tour comes closest to the imposing sight of the mountain and its verdant heart on our second stop: the Botanical Gardens of Nevis.

On the way to our destination, Smoothie tells us that the British focused heavily on sugarcane plantation during the 17th and 18th century, a crop that brought such wealth to the colonists that it earned Nevis the lofty sobriquet “Queen of the Caribees.” Unfortunately, it also meant widespread deforestation as planters had to clear the original natural vegetation to make way for the foreign crop. While scrub and secondary forests today cover the former sugar fields, the island’s coastal plains never recovered the primeval lushness of the precolonial days. The Botanical Gardens were therefore built over 20 years ago as a way to harken back to Nevis’ verdant origins.

A guided tour is offered as soon as we arrive, but instead of joining my fellow passengers, I’m immediately drawn to explore this tropical oasis on my own. A regal avenue flanked by towering royal palms –one of the more than 100 palm species found within the gardens–  leads the way into the lovingly landscaped attraction. With a total population hovering around 11,000 inhabitants, it wouldn’t be a stretch to call Nevis a laid-back island, even for Caribbean standards. But the peaceful setting of the five-acre gardens manages to give me the impression of being worlds away, even though we only traveled 3 miles from Charlestown.

That feeling is enhanced by the eclectic, international flavor of the botanical park. Split into 5 distinct areas –orchid, cactus, tropical fruit, vine and herb gardens– the diverse plant species on display hail from countries as far as Brazil, Madagascar and Papua New Guinea. Manmade structures also evoke distant lands: A large greenhouse, modeled after the Palm House at Kew Gardens in England, houses the rainforest conservatory, which in itself shelters a blend of tropical plants and resident Amazonian green parrots, and a faux-Mayan temple with Olmec and other pre-Columbian motifs.

Additionally, about two dozen stone statues of Asian origin are scattered throughout the gardens, including representations of Hindu deities like Ganesha, Lakshmi, Krishna, Shiva and Vishnu, as well as statues of Buddha, a temple pagoda and a pair of Foo dog-lions. Representing Buddhist and Hindu icons, the statues are laid out carefully so as to follow the principles of Indian Vastu Shastra and Chinese feng shui. Officially, as per the gardens’ brochure, the sculptures educate, empower and add culture to nature’s bounty for those visitors interested in yoga, meditation and Eastern spirituality. Without reading too much into their mystical meaning, I found the statues to blend seamlessly with the lush environs, their presence going a long way into reinforcing the peaceful and paradisiacal setting of the gardens.

Yet for all the aforementioned international accents spread throughout the place, the centerpiece of the gardens celebrates the local West Indian heritage with an imposing, two-story Nevisian-style Great House. But there’s a global twist: it houses the Oasis in the Gardens Restaurant, specializing in authentic Thai cuisine.

A sudden and vigorous yet brisk Caribbean rain serves as a powerful reminder of the Land of Beautiful Waters’ strong association with the precious resource, as we hurry back to our bus and on to the third and final stop of our day in Nevis. 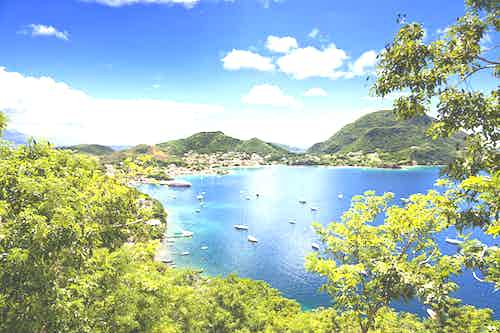 A window to the past

Back downhill and at the edge of the Caribbean Sea, we arrive at Fort Charles. Or, more accurately, what’s left of it. In sharp contrast to the sprawling and impeccably preserved UNESCO World Heritage Site of Brimstone Hill Fortress on the sister island of St. Kitts, nature has mostly reclaimed Nevis’ erstwhile military complex. The ruins of an abandoned fort may not be everyone’s romantic idea of a site rich with swashbuckling tales of yesteryear, but it suits me just fine: approaching the vine-covered walls surrounded by overgrown grass, I feel like an archaeologist unearthing a long-lost historical site.

My Indiana Jones daydream comes crashing down as soon as I come across a small, unmistakably modern sign providing some context to the ruins. The British built Fort Charles in the 1630s, strategically placing it on a small spit of land overlooking Charlestown’s Gallows Bay. I also learn that several French attacks in the 1700s and early 1800s tested the grit of the stone fort, before it was definitively abandoned in 1894.

There is a haunting beauty about Fort Charles. Within what’s left of its walls, the partially-standing remains of a cistern, a powder magazine and several rusty cannons zealously pointing at the immensity of the sea provide a fleeting glimpse of what the life of an English soldier must have looked like centuries ago.

As our day in Nevis comes to a close, Smoothie reveals an unscheduled attraction on our way back to the Charlestown pier, one that would better help explain his nickname. “Ladies and gentlemen,” he gears up, soon after issuing the standard thank-you’s and see-you-again-soon best wishes. “I’ve had the privilege to share some of the main attractions of my island with you. But mere words and factual information cannot fully express what Nevis means to me. Only my passion for music allows me to convey these feelings.”

Without a drop of hesitation, Smoothie confidently begins to belt out an a cappella ode to his homeland of his own composition: “Nevis, lovely Nevis/The land of trees and sun/And clean, fresh air/Nevis, lovely Nevis/ It’s the land of people smiling nice and peaceful/ My friend, you are never sad when you come by here…” A blend of surprise, amusement and delight takes hold of our group as we can only react with a heartfelt applause to Smoothie’s sincere artistic display.

The catchy verses stay with me well after we embark our tender ride back to Silver Whisper. As Nevis Peak’s cloud-shrouded figure fades in the distance, I realize that I just visited a Caribbean island without setting foot on any of its beaches, perusing duty-free shops, indulging in a round of golf or sipping a tropical cocktail swayed by cool, palm-swaying breezes. And not once did I miss any of these activities. Lovely Nevis, indeed…