In the extreme northwest corner of Australia, a rust-red coastline rises out of the water like a medieval city wall. Come January, when the wet season soaks the parched earth of the Kimberley region, hundreds of thousands of gallons of fresh water spill over a 25-story high cliff face into the King George River. It’s a wondrous sight: Twin falls with water as white as wedding veils plunging into two emerald pools, which are hugged by enormous sandstone arms. They’re among the most spectacular waterfalls in western Australia

The Closest Thing to Time Travel

The King George Falls are in full flow from April each year. Without any road access to Western Australia’s tallest waterfall, all manner of creatures have the run of the place. On a rock ledge, a saltwater crocodile warms its belly on a stone bed, much like its forebears would have done millions of years ago. In the shallows, mullet and milkfish swirl and in the seagrass beds, dugongs tilt back and forth like they’re playing on a seesaw. Look up, and a White-Bellied Sea Eagle is preparing to swoop from its high vantage point to catch an unsuspecting fish.

That’s the great thing about the King George River, which stretches over 70 miles (110 kilometers) through the Drysdale River National Park before emptying into Koolama Bay and the Timor Sea: It makes you feel like you’re no longer in the present day. Here, in a park with “no visitor facilities and no marked walk trails,” you’ve regressed to a time when animals ruled the earth. When you explore this isolated shoreline, you experience time travel.

Lea McQuillan, Marine Biologist and Silversea Expedition Team member, describes the experience of a King George falls Zodiac tour. “Heading upriver to the King George falls, we pass through an amazing canyon carved out of 1.8 billion-year-old King Leopold Sandstone by a freshwater river,” she says. “It has been flooded by rising seawater over the last 17,000 years.” As an Expedition Expert, McQuillan has worked on ships all over the world for more than a decade, but the Kimberley keeps calling her back. She returns, without fail, every year. “They’re different every year due to the influence of the rainfall in the wet season,” she explains. “And you never know what wildlife will be around the corner. “When I ask her if she ever tires of the spectacle, she laughs. “Impossible,” McQuillan says. “I have cruised the King George River 192 times. Each has been a magical experience.”

Getting to King George Falls is half the fun. As soon as the ship drops anchor in Koolama Bay, McQuillan prepares the Zodiac for her guests. On the water, they follow the zigzag path of the river for about 7.5 miles (12 kilometers). “Finally, when I see the falls, it’s magnificent—so much gushing and thundering water,” she recalls. “I edge the Zodiac to within meters of the rock face and feel dwarfed by rocks rising into the air and the water plunging below us. The experience is breathtaking.”

For tree lovers, McQuillan points out the flowering woollybutt gums and the flat-topped acacia trees that dot the shoreline. Fig trees dangle their roots down the cliff face, and mangrove species colonize the water’s edge. On exposed slopes, there’s an endless carpet of spinifex, while protected side gorges hide patches of monsoon forest. Push further south to the Horizontal Falls in the milky blue waters of Talbot Bay, and you’ll witness a turbulent tidal flow ripping through two narrow chasms in the coastal range, creating what looks like a horizontal waterfall. In fact, Naturalist David Attenborough once described these horizontal falls in Australia as “one of the greatest wonders of the natural world.”

The land of the Balanggarra people, which unfurls over 2,200 square miles (5,700 square kilometers), is home to some of the oldest and most prolific collections of rock art in the world. Upon reaching the Kimberley up to approximately 60,000 years ago, the earliest Aboriginal explorers started decorating the sandstone walls with exquisite rock art, now referred to as the Bradshaw paintings. Some of the paintings show elongated human forms dancing or hunting and wearing head-dresses and tassels. 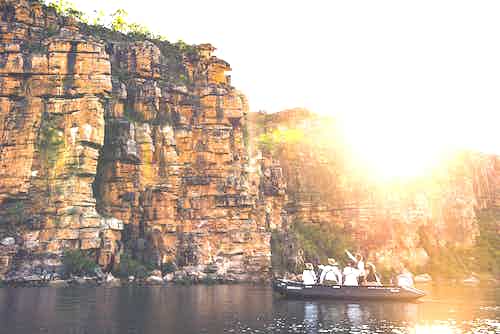 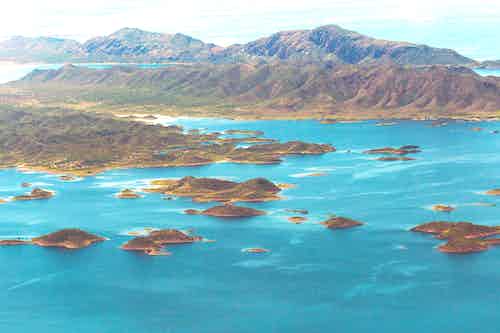 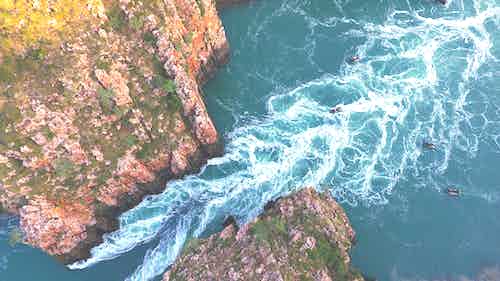 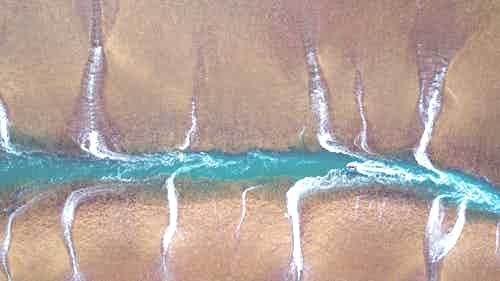 For the Balanggarra people, the King George River holds high cultural significance. They view the King George Falls as the male and female incarnations of the Wunkurr (rainbow serpents). “There is a rich history here for the Balanggarra people, and there’s more recent history as well,” says McQuillan. “Every time I come to Koolama Bay I remind guests of the World War II incident.”

In 1942, M/V Koolama was attacked by Japanese bombers as it made its way north along the Western Australia coastline. Upon receiving word of the bombing of MV Koolama, the Balanggarra people set out to assist. “The skillful Balanggarra men led the arduous overland journey with 93 of the 190 passengers, crew and army personnel to the remote Kalumburu mission,” says McQuillan.

Fortunately, it’s not quite so difficult to tackle this enchanting corner of the world these days. Seeing is believing, says McQuillan, who is counting down the days until she can once again bear witness to the falls, as their vitality comes alive from April.