That Winning Way You Used to Pack for a Cruise? It May No Longer Be in the Bag

This is the first in a series, written exclusively for Silversea’s Discover Blog, about the realities of travel as we all start to move — some of us more slowly than others — back to resuming our cruise vacations. Written by longtime Los Angeles Times travel editor, Catharine Hamm, who describes her columns as “one woman’s take on navigating the banana peels of our new travel realities,” aims to keep us laughing (and maybe groaning).

It was neither fully winter nor reliably spring at my destinations, but I knew that three stylish cardigans would have me covered. Or they would have if I had remembered to pack the tops that went under them.

BTP—before the pandemic—I was an experienced packer, not brilliant but perfectly adequate. Tops usually went with bottoms. Socks matched. Attire was just formal enough to ensure I was not ejected from dinner with the captain, whether it be Cook or Hook or the commander of a cruise ship.

But apparently, I was rattled after my release from Covid captivity. Two trips within two weeks—Los Angeles to Seattle, then home to L.A., then to Washington, D.C., and home again, were a sartorial debacle. I had too much underwear and not enough outerwear. The only footwear I had were black athletic shoes that no one would mistake for Christian Louboutin pumps. Even my makeup seemed makeshift. Inexplicably, I had packed a tube of the black lipstick I wore after my second Covid vaccination so I could tell people, jokingly, I was feeling a little punk. A real thigh slapper that, unless you find that lipstick in your otherwise limited cosmetic bag and don’t find, say, foundation.

I thought procedural memory—knowing how to do something even if you haven’t done it for a while—was forever, but mine apparently died somewhere in the last 14 months. I don’t know who set that timeline, but I’d like to slap that person, who may very well be me

Because who else would have ignored a tried-and-true method—making a list of outfits for each day and ensuring each piece was packed and also making a list of essentials, including cosmetics—and instead shoved several weeks’ worth of clothing into three compression packing cubes? Not only was my 21-inch suitcase so heavy I had to play the old lady card and ask for overhead bin help on my flights, but when I opened those cubes, my clothing sprang out like the clown in a jack-in-the-box. The clothes from my bag were wrinkled worse than my face, which presented a quandary because I dislike ironing even more than aging.

I did remember some tried-and-true techniques, and I was thankful I had included those components. Nice scarves covered a multitude of sins, including those that involve spilled soup. (No one asked, “How was that chicken noodle?”) Jewelry—classy not flashy–added some panache to the simplest outfits, which was all of them. Fortunately, I had no occasion for formal wear; the only gown I had was flannel with a little red bow at the neckline.

I will do better next time. I will return to my outfit charts and lists, which offer some flexibility for weather incidents and tomato-based soup accidents. I’ll make flip-flops do double duty as slippers for nightwear and for strolls to the pool deck, and I’ll pack a pair of low-heeled pumps that may not stop traffic but also won’t stop me from walking. (Is there such a thing as Spanx for bunions?) I’ll stick to one palette, which means everything will go with everything, but I’ll also remember that nothing goes with anything if you don’t pack it. 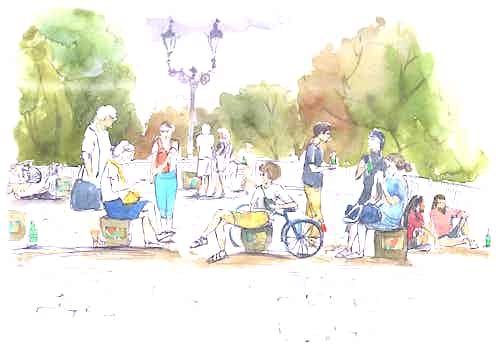 We’re Socially Rusty After Lockdown. But That Need Not Mean a Slip of the Lip on the Ship

And if the worst has happened, well, every ship has an on-board boutique. If it feels odd to be rewarded for forgetfulness, a just universe should occasionally allow fortune to favor the flustered.