Peter Greenberg has a unique set of qualifications that make him a slam-dunk as Silversea’s master of ceremonies for christenings, a role he will reprise in November when the Silver Endeavour is welcomed to the Silversea fleet in Antarctica.

He’s a lifelong journalist, instantly recognizable from his role as CBS News Travel Editor and previous travel journalism stints with NBC and ABC. He’s also an author who tells readers how to make the best of any trip, earning the moniker Travel Detective. He’s a documentary filmmaker, including his world-spanning “The Royal Tour,” and he’s an Emmy winner. Along the way, he has become America’s travel guru, offering advice, caution and counsel for any traveler, whether the journey is land, sea or air.

So, yes, you probably feel as though you know this man, and these attributes alone make him an ideal emcee. But what you may not know is that he’s had a nearly lifelong love affair with boats, ships and water. He has been a boat owner since he was 14, having worked numerous jobs to save the money to buy one. He’s had a Captain License since he was a teenager. He lives on a boat when he’s home in Los Angeles. When he’s in New York, yes, he has vessels there too, including his first one.

He has presided over numerous Silversea christenings, but his enthusiasm for this task remains genuine. He will be joined by Felicity Aston, who will be the godmother of the Endeavour. Aston has lived in Antarctica and is the first woman to ski solo across the continent.

Greenberg sat down recently for an interview about his upcoming role, his thoughts about ships, especially Silversea’s new-to-fleet Silver Endeavour, and why the welcoming of a new ship is certain to be an enduring memory.

Do you know Felicity Aston?

I not only know her, but I’ve also interviewed her on my CBS radio show. She’s remarkable. 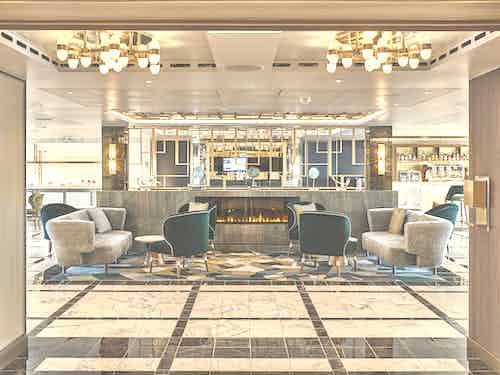 Imagine nothing but white followed by white and more white. It really boggles the imagination. She didn’t have anybody helping her. And to think she says she’s not spatially oriented! Her dedication, her perseverance are what exploration is all about. That’s how new worlds were discovered. Who better to be the godmother?

There are certain traditions maintained in christening or naming. One of the signature items is the playing of the bagpipes and usually one or two musical performances. It’s an intimate ceremony, and it makes it more memorable. It makes it more intense.

You are a witness to history and to the culmination of thousands….of man and woman hours that went into the engineering, design and construction and all the special touches that make a ship a ship but also a special floating home for so many people every time they leave the harbor.

The one thing that all [such ceremonies] have in common is that the emotional connection only grows over time. I have an emotional relationship with these events.

For me, a ship is more than steel that floats in the water. It is truly, literally, a vehicle of storytelling, of romance, of exploration, of discovery and of lasting friendships, all forged on a journey. The excitement of being part of the ceremony is that I sort of know what’s going to come next, and I’m excited by it.

Any unusual events you’ve experienced at a christening?

At the Silver Muse christening in Monaco [April 2017], we had it outdoor with a full symphony orchestra and opera singers and at least 500 people. Just as the orchestra started to play the first song, a huge wind blew in and sent the sheet music into the air. Everything was quickly moved inside. The crew was amazing. There was a video camera trained on the ship so that the audience inside could see the bottle hit the hull outside. In the service industry, it’s not the [problem] you’ve experienced; it’s how you recover. And they recovered very well.

Plus, Prince Albert II of Monaco, whom I’ve known for 20 years, was there, and he was having fun because he was entertained by all of us weathering the storm.

It’s built unbelievably well. It’s an incredible, ice-class ship, state of the art. If you design a ship well, you are allowed to have moments of unexpected juxtaposition. The water temperature may be freezing, yet you can enjoy watching the water from [Endeavour’s enclosed] heated pool area. True luxury is when you have options, when you have choice.

This won’t be your first time in Antarctica. What have you realized about it?

The silence is deafening. It’s overpowering, and you realize in an instant how small you are in the world. How insignificant you are. That’s why it’s important to have this experience. It finally brings into perspective … how much we don’t know, how much we need to know and how much we need to share, all told against a pretty harsh but beautiful environment. You get mesmerized. You have to keep reminding yourself where you are.

And to be part of this event?

People do get excited to be invited to the party. You’re part of history. You’re there for the birth, the baby’s first steps. That’s a big deal for those of us who have great memories and are always trying to add to them. We know how important they are. You share not only bragging rights, but you also will be able to say, “Hey, how lucky was I?”