About a decade ago I had the pleasure of cruising through Geirangerfjord, possibly Norway’s most spectacular chasm. The Seven Sisters waterfall, more than 1,000 feet tall, laughed its way down the face of one cliff, while abandoned farmhouses were perilously perched hundreds of feet above the water, dotting the sides of the steep-walled fjord.

As we eased into the photogenic hamlet of Geiranger, population 250-or-so, I thought — what a staggering, isolated place to visit. And what a precious corner of the planet to preserve for generations to come.

The West Norwegian Fjords – including Geirangerfjord – were added to UNESCO’s World Heritage List in 2005, recognizing not only their appeal but also their vulnerability. Norway’s Ministry of Climate and Environment implemented new requirements for emissions and discharges in the fjords— restrictions that went into effect in 2019.

Norway’s measures aren’t isolated. From Alaska to Antarctica, safeguarding environmentally vulnerable destinations is a top priority. And yet: Building on cruising’s environmental footprint is not new for the industry.  In 2018 the Cruise Lines International Association (CLIA) announced a commitment to reduce the industry’s rate of carbon emissions across the fleet by 40 percent by 2030 (measured against a 2008 baseline).  CLIA also set a goal of net carbon neutral cruising by 2050.

The cruise ships under construction today will almost surely be sailing in 2050, and the technology for carbon-free cruising is still years away, so what steps are cruise lines taking today to move the industry into a cleaner future?

For Silversea Cruises, protecting the environment and the communities it sails to has been a long-standing priority and, In July 2023, will be launching a dramatically ambitious ship design. Dubbed the Nova Class, the project is a combination of innovative new technologies and an authentic commitment to sustainable cruising that is making waves. Among the sustainable practices, Silver Nova, its first Nova class vessel, will rely on liquefied natural gas (LNG) as its principle fuel source.

In itself, using LNG is not new.  Since 2019, several massive ships within the mainstream cruise industry have been launched and utilize LNG fuel.  Silver Nova will be the first luxury liner to set sail under LNG and, with a 728-passenger capacity, will deliver the intimate experience Silversea’s guests have come to expect.  Plus, the Nova Class will take several additional steps to reach a new level of sustainability.

The thrust of the project introduces hybrid technology for the vessel’s engines.  Not unlike a hybrid car that alternates between fuel and battery power while we drive, Silver Nova will be the first ship to reduce carbon emissions through not only the use of LNG, but also by charging fuel cells and batteries to reduce the consumption of fuel whenever possible. It’s interesting to note that hybrid cars have two fuel sources — Silver Nova will have three.

“At Silversea, we have always been very careful in reducing our impact and preserving the very remote and beautiful locations that we are visiting,” says Bruzzone.  Not surprisingly, reaching these often far-flung destinations remains a top priority for the line’s clientele.  And with access to places like Geiranger at risk, the cruise industry must take bold new steps, including enhancing collaboration with the communities we visit, he tells me.  “We understood that it was time to start forward with a new class of ship that was extraordinarily directed to sustainability.”

The increased regulations are hardly limited to Norway. The Baltic and Nordic regions are seeing new restrictions, and Mediterranean ports may be introducing tighter regulations.  Venice, Dubrovnik and Amsterdam have started limiting or drastically reducing cruise calls.

“So many destinations are demanding stricter regulations for cruise ships,” explains Teijo Niemelä, editor of the business-to-business industry publication Cruise Business.  “There is a lot of pressure on the shipping industry in general.” At the same time, Niemelä says, the industry is thoughtfully responding to the changing cruise landscape as it globally prioritizes its sustainable footprint.

Consumers are also increasingly aware of environmental impact, Niemelä adds. “More and more people are buying electric cars and many are becoming vegetarian or vegan.  They are starting to demand solutions.”

Could sustainable travel be the future of luxury travel?

When Silversea became part of the Royal Caribbean Group in 2018, Bruzzone says the companies worked together to identify synergies that would allow Silversea to develop the Nova Class ships.

The cleanest option currently available for ships while they are docked is shore power, and Silver Nova will “plug in” at the ports that offer it, allowing the ship’s engines to be turned off.  When shore power is not available, the ship’s charged fuel cells will allow Silver Nova to dock and sustain its hotel operation while generating virtually no emissions, burning natural gas to supplement the use of battery power.

Other features aboard the Nova Class ships will further reduce their footprint at sea. 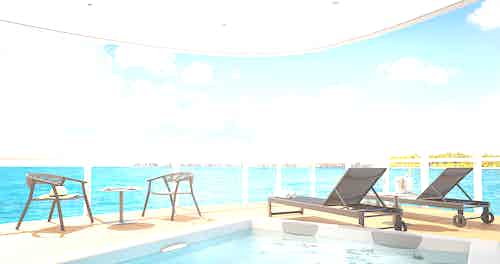 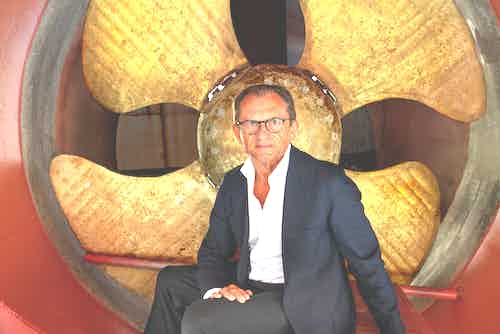 “The hull will be redesigned and optimized for dynamic efficiency, to minimize the consumption of fuel, while maintaining the speed we need for the itinerary,” says Bruzzone.  Increased reliance on LED lighting will also lower power consumption.  “And the vessel will be installed with a micro gasification system, one of the world’s most compact and efficient technologies to convert what we produce as waste into thermal energy.”

The initiatives Silversea Cruises is undertaking are not limited to vessels currently under construction.  The engines of expedition ships built in the 1990s are being modernized in sensitive areas of the world such as Antarctica.  And coming retrofits to the Silversea fleet will allow the ships to sail to almost any port that currently has restrictions

“We just completed a conversion to transform Silver Wind into a Polar Ice Class ship,” says Bruzzone. “As part of the conversion we upgraded the engines to TR3, which is the best class for emissions that is required for the fjords in Norway.”

All of which bodes well for the next time I sail to any of the world’s special places.  Geirangerfjord is one of cruising’s most spellbinding passages.  To know that I can visit again someday makes my fingers itch for a camera to click away with.