Behind the Lens: Filming Rays of the Galápagos

The pristine underwater world of the Galapágos Archipelago offers freedivers and snorkelers the chance to escape the pace of life on land and swim alongside some of the planet’s most spectacular marine life.

Off the coast of Bartolomé, a small island close to the centre of the archipelago, Silversea Expedition Filmmaker David Padilla remembers his most spellbinding moments with the diverse ray species here. They range from Spotted Eagle Rays, Golden Rays and Mobula Rays through to the world’s largest species, Oceanic Manta Rays.

“Bartolomé Island is such an amazing place and what’s mesmerizing about rays is that they are like angels or birds, they move so gracefully underwater and each species swims in a different way,” says David, who has been working as a filmmaker on the Galápagos Islands for four years and is a certified freediver.

David held his breath for up to a minute while diving 10 meters below the surface, enabling him to film the wing-like movements of these gentle creatures.

“Freediving is like an underwater meditation, you just have to connect to your mind and body and enjoy the moment itself,” says David. “One can see pictures or documentaries, but it’s a little difficult to grasp the immensity of animals like Manta Rays unless you’re there.

“The biggest Manta Ray I saw was about six or seven meters in size. You’d think that you’d feel frightened seeing such a huge animal, but actually they’re very peaceful and get scared easily. I was probably not even half of its body-size, so it was crazy to try and get some shots of it,” he adds. 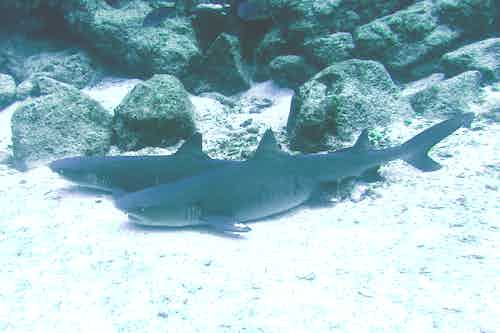 Behind the Lens: In the Galapagos, the Grace of Whitetip Reef Sharks

Behind the Lens: Experiencing the Splendor of Hammerhead Sharks in Galapagos

During one encounter which features in this film, David used his Sony RX100 Va Compact Camera with a Nauticam underwater housing to film the courtship dance of two male Manta Rays swimming around a female.

“They swim so fast and because they are so big, it was very difficult to swim next to them, but after a while I realized they were swimming in a circle,” he says. “They were following a pattern so I was able to predict their movements.”

Another experience while snorkeling off a small islet named Guy Fawkes, which is located northwest of Santa Cruz Island, left David with footage and a memory he’ll never forget.

“There were two manta rays which were at least five meters in size feeding while doing backflips in front of me with their mouths open in a way I’ve never seen before. I couldn’t believe what I was seeing,” he says. “At one point I realized they knew that I was there and they didn’t mind my presence – it was amazing to swim with them for 20 minutes.”