The fascinating history of South Georgia speaks of Captain James Cook’s explorative voyage of 1775 and a devastating whaling industry that ceased in 1965. Yet curious travelers now journey from far and wide to witness South Georgia’s incredible wildlife, which includes one of the world’s largest colonies of King Penguins, as well as the island’s breathtaking landscapes.

“South Georgia stands alone as a bastion of solitude in the South Atlantic Ocean. Because the island is so remote, few humans reach its shores, and so I understood the significance of the opportunity I had when I journeyed to the Southern Hemisphere aboard Silver Explorer in December 2019,” begins McDonald, an English national who has traveled the world with Silversea, when recalling “the most rewarding expedition of [his] life.”

“While the whaling and sealing industries of the mid-twentieth century devastated South Georgia’s wildlife populations at the time, numbers have essentially recovered now. Of course, the island’s penguin colonies were largely unaffected and so they exist exactly as they should—untouched. The penguins still live safely on and around the cloistered beach St. Andrews Bay; their only predators come from the water, in the forms of orcas and leopard seals, so the iconic birds can relax once ashore. I therefore had the perfect opportunity to film their natural behavior at one of the world’s largest gatherings of the species.”

“While I knew what to expect, I wasn’t prepared to see anything of this magnitude—I’d never experienced anything like it.”

On the Penguin Trail

“From Silver Explorer, we took to the Zodiacs in St. Andrews Bay, landing on the beach approximately one kilometer from the main King Penguin colony to avoid disturbing the animals. I could see elephant seals and fur seals, and so I had to be careful as I disembarked the craft with my equipment.”

“There was an endless stream of King Penguins that seemed to just drop out of the waves, proceeding to waddle up the beach towards the colony. We waddled together, at penguin pace—the penguins knew exactly where they were going and so, after capturing a few videos on the beach, I just let them lead me. Because King Penguins are not the fastest of walkers, I was able to move around them with my gimbal, taking care to keep a respectful distance, recording their charismatic strut for the first time.”

“As I approached the colony, where the animals were nesting, I began to encounter King Penguin chicks, which are quite comical in their appearance. They were so fluffy and round, seemingly larger than the mature penguins. They approached us inquisitively, eager to find out what we were. The adult penguins were squawking for their young, using their distinctive calls to find their respective chicks; hearing such a cacophony was incredible. They eventually reunited and the anxious penguin chicks were fed. I was interested to learn that penguins will often remain loyal to their respective nesting sites, choosing to raise their young in the same spots in which they themselves were reared.”

“It’s not until you witness something as vast as the penguin colony in St. Andrews Bay, South Georgia, that you really develop any sort of understanding of the magnitude of the natural world. I was staggered by the scale of the penguin population before me, which seemed to stretch from the water’s edge all the way to the mountains in the distance.”

“Visiting a wildlife-rich destination that remains largely un-impacted by humans, in which the wildlife is unafraid and inquisitive, is remarkable. It’s a humbling experience. The penguins were as interested in me as I was in them. I felt emotional. There’s something about wildlife that is just incredibly humbling. As a passionate expedition filmmaker and wildlife photographer, there are few scenes I’d rather film,” says McDonald. 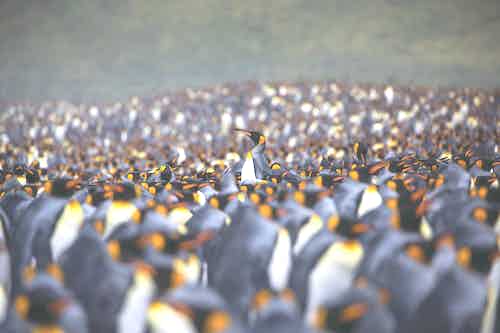 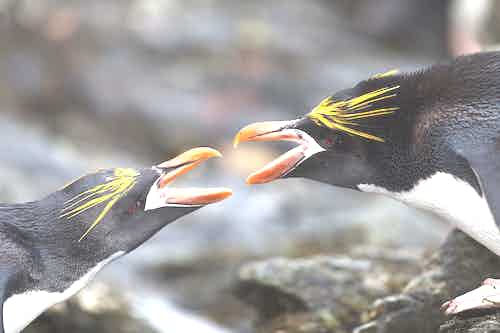 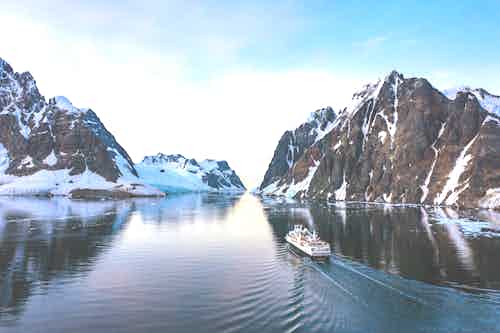 “It’s so, so rare to see anything on that scale. There are very few things like it in the world. I’d seen the Gentoo and Chinstrap Penguin colonies of Antarctica, but landing in St. Andrews Bay was an altogether different experience: because of their large stature, the colony of King Penguins was far more imposing. To know that colonies like this, across different species of animals, are perhaps more of a rarity in today’s world made this experience even more special. It’s comparable to herds of wildebeest on the African Savanah. I was lost for words.”

“I knew that the only way to capture the sheer size of the colony was to launch my drone. I initially left my DJI Phantom 4Pro drone at the beach, taking only my backpack (which is bigger than me!), which, along with my Panasonic GH5 camera, contained my Canon 16mm-35mm and Lumix 200mm-800mm lenses, as well as my tripod. I was filming with the Ronin gimbal as I went, but my tripod would enable me to capture steady, zoomed-in shots later on. The tripod is extremely heavy to be carrying in challenging environments, but I maintain that a steady tripod is the most important item in your kit,” McDonald states, while sharing his best tips for photographing wildlife in Antarctica.

“When I’d captured everything on my shot list, and all that remained was to record an overview of the colony from above, I hiked back to the beach to find my drone. Launching a drone into the sky is a liberating feeling, insomuch as you have the sensation of flying over the land. It’s my favorite method of filming.”

When I asked McDonald whether, as an expedition filmmaker, he learns anything through these types of experiences and destinations, he responded:

“When filming wildlife, it’s usual to have one point of focus. You usually await a rare display of fascinating behavior or an unusual interaction between animals. But the abundance of life in South Georgia honed my ability to capture strong shots when it can all seem so overwhelming. Each penguin presented a distinctive personality type, an individual narrative, and a unique set of behaviors. It’s the videographer’s job to zoom in on individual moments, to be present and attentive to what’s actually happening around you. But you also have to recognize, at a moment’s notice, how to capture the scene before you in the best possible way—that’s when the drone became essential.”

“South Georgia was certainly a photographic test—given the incomprehensible beauty of the place and the abundance of opportunity that presented itself—but it was one that I would give anything to experience again and again, ad infinitum.”