Around the World in 60 Cocktails: Clara Colada

“If you like piña coladas…”, then you’ll surely enjoy our spin on the classic pineapple rum drink. British-American Rupert Holmes’ catchy 1979 hit drew worldwide attention to this quintessential Caribbean concoction, and just a year earlier, Puerto Rico declared it the island’s national drink.

The original recipe is widely believed to have been created in 1954 by local bartender Ramón Marrero in San Juan’s famed Caribe Hilton Hotel. While the traditional recipe is characterized by the velvety consistency of coconut cream, our lighter piña colada variation relies instead on coconut water.

Puerto Rico’s own Bacardi Carta Blanca, arguably the world’s most famous rum, is still at the heart of our version, which also incorporates the hints of banana, citrus peel, spice and pineapple afforded by Plantation Pineapple Rum. The sweet touch of coconut is further enhanced by Chamarel Coconut, a beautiful liqueur from Mauritius. The Clara Colada might not be the Puerto Rican national drink, but we think you’ll enjoy this piña colada alternative … and you might even love getting caught in the rain! 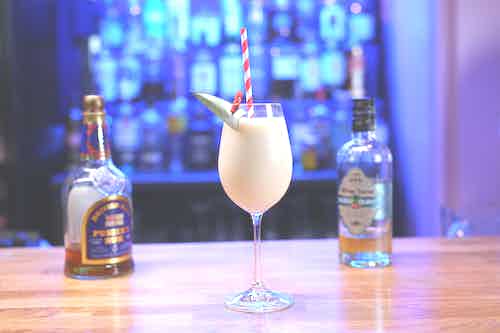 Around the World in 60 Cocktails: Tohu