Around the World in 60 Cocktails: From Light to Liberty

In 1869, as the Suez Canal neared completion, French sculptor Frédéric-Auguste Bartholdi tried to convince Ferdinand de Lesseps and the Egyptian government to let him build a sculpture called “Egypt Bringing Light to Asia” at its Mediterranean entrance. The project – a 90-foot tall Egyptian lady – was originally intended to welcome sailors from the Suez Canal into the Mediterranean.

The sculpture was unceremoniously vetoed, but Bartholdi did not give up. He went in search of other dreamers and found them in the United States, specifically in then-president Grover Cleveland, who oversaw the “Liberty Project”. Rather than “Egypt Bringing Light to Asia” she crossed the Atlantic. Officially called “Liberty Enlightening the World,” the monument has since become better known as the Statue of Liberty. It could be said that today’s Lady Liberty inspired Bartholdi’s very own American Dream!

Our signature twist on the classic Collins is inspired by the three continents that made Liberty happen. Using almond, apricot, lemon, pomegranate, watermelon flavors from Egypt, yuzu from Asia and bourbon from America, this fruity and exotic cocktail instils world travel in one easy drink. 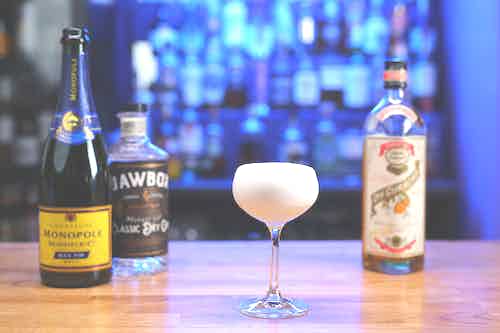 Around the World in 60 Cocktails: Punch à la Romainé