Around the World in 60 Cocktails: Second Empire

Throughout history, the coffee shop has grown in stature. From the first coffee house in Damascus in 1530, to having a Starbucks in every major city in the world, going out for a cup of Joe has always been in. Whether it’s at iconic establishments such as the Cafe de Paris in Monte Carlo or in a coffeeshop in New York City, Istanbul or Buenos Aires, there is no denying the allure of coffee.

Melbourne’s love of caffeine has been brewing since the 19th century when awe-inspiring coffee palaces were constructed in its honor. During the 1880s, in response to drunkenness and antisocial behavior, the Temperance movement grew in popularity. This led to people abstaining from alcohol and moving away from pubs. Where then will people go to socialize? Enter the coffee palaces.

Inspired by the classic Espresso Martini, this cocktail’s name is taken from the architectural style of The Federal Hotel & Coffee Palace that was built in 1888, on Collins Street in Melbourne. Joining two perfect beverages in matrimony, the once shocking, now iconic, cocktail will certainly pack a punch whether you drink it morning, noon or night! 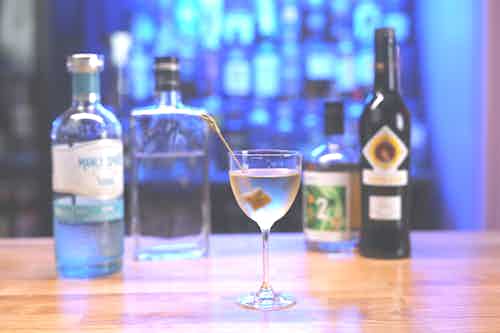 Around the World in 60 Cocktails: Perfect Sphere