Around the World in 60 Cocktails: Supersonic

Hands up if you remember the glory days of traveling by Concorde. The supersonic jet was designed and built by British and French engineers in the 1960s and was so named as the word means “agreement” in both languages. Concorde could reach up to speeds of 1,500 mph (but cruised at a moderate 1,350). Its altitude was nearly 60,000 feet – high enough to see the curvature of the Earth!

Traveling at twice the speed of sound, Concorde set the world record for crossing the Atlantic in an amazing two hours, 52 minutes and 59 seconds in 1996. The plane was a not only a regular sight in both London and New York but also Barbados – the only country in the Caribbean to have a regular service. Average flying time from London? Just three hours and 45 minutes.

Thus Barbadians are proud of their supersonic guest. So much so that a museum has been dedicated to one of the planes, offering visitors a chance to fly (by simulator) the jet themselves!

If taking off and landing Concorde proves thirsty work, then we have just the treat for you! Mixing the “forbidden fruit” of the island – grapefruit – with the bold spices, caramel, vanilla and tropical fruits of Mount Gay Black Barrel, we’ve created a refreshing pick me up that is sure to transport you to a Bajan state of mind in no time! 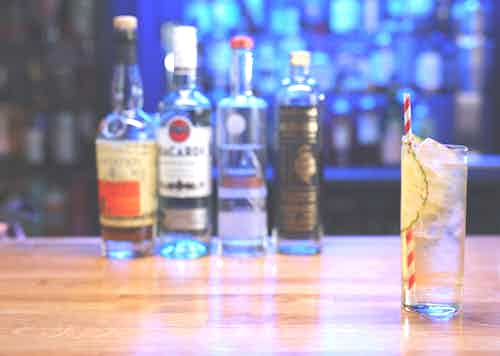 Around the World in 60 Cocktails: Clara Colada