Semi-translucent clouds float above a pristinely raked beach, linger over the heads of curious diners and dissipate out an open window. “Bon appetite.” A few guests reach for the camera on their phones. Others touch a wary finger to their tongue, discovering the sand to be breadcrumbs. The majority sits inquisitive, as if awaiting further instruction. We’ve reached dessert and the culmination of a 3-hour meal that has goaded, delighted and blurred the boundaries of fiction, fantasy and food. One by one our table of 15 stands up, now veritable cloud hunters.

Earlier that evening, I lead the group of Silversea guests, all traveling on Silver Dawn and participating in Barcelona’s S.A.L.T. Experience, down Joaquin Costa. It’s a narrow street in the heart of Barcelona’s hip Raval Quarter, where bearded and tattooed expats and locals sip lattés and skateboarders slalom through the crowds. Adjacent to Nømad Coffee Shop, regarded as the king of cool in this city, I press the doorbell on an unmarked graffitied door. It buzzes open.

A long hallway leads to a metallic staircase, up one flight to a landing of worn wooden beams. Behind another door stands Xavi, exuberant, holding his Maine Coon named Arnau, easily mistaken for the Cheshire cat. Chef, food designer and creative tour de force, Xavi is an emerging star in Barcelona’s exploding culinary scene and our culinary, historical and musical guide for the next three hours.

“Welcome, welcome, hola!” Xavi receives us with dark, smiling eyes. “Come in.” A cello leans gently on a divan. A gold and navy squid print made with Japanese ink hangs framed above a faded brass chest of drawers. Dried roses and a massive monstera deliciosa share a side table. Baroque music wafts faintly from a back corner. We’ve entered Xavi’s world.

Months prior, on a cold February morning, I met with Xavi in his beautiful open kitchen with a proposal to create a meal for Silversea’s hallmark program S.A.L.T. Short for Sea and Land Taste, S.A.L.T. takes guests beyond traditional land excursions and into the hearts and kitchens behind the world’s most compelling food stories. I wanted something distinct; something new; something that captures the DNA of this magical city. “You mean an experience, part performance, part music, part food?” Xavi inquired impishly. “I have a few ideas” he assured me. We agreed to think about it over the weekend. 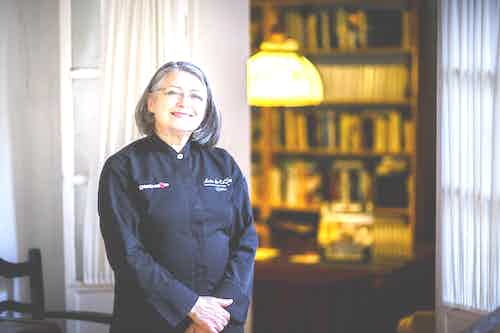 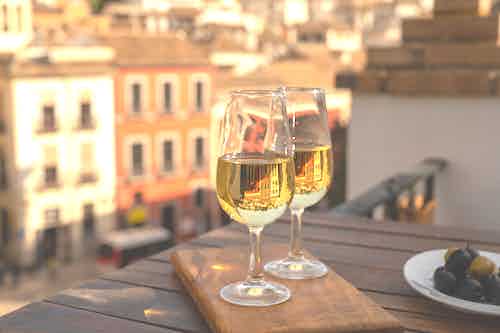 In Spain’s Cadiz, S.A.L.T. Welcomes You to the Golden Triangle of Sherry’s Terroir 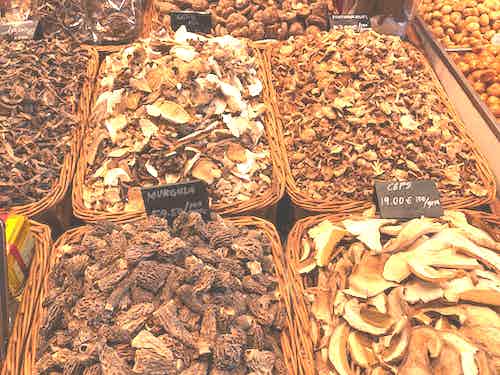 A Mushroom-Based Foray through La Boquería, Spain’s Most Iconic Market

Within the hour I receive a text from Xavi, sharing that he has a project underway that may lend itself nicely to my request: “I call it the Mediterranean Triad,” he writes. “An ancient Greco-Roman food installation on wine, bread and oil, a sort of homage to where our food tradition comes from.” Perfecto, I thought. A few more exchanges and an idea was born: The History of Barcelona in 7 Dishes—each course would represent a different era of the city, and each coupled with period music. Xavi’s innate storytelling and deep musical knowledge would guide S.A.L.T. guests through every course, providing colorful insight and anecdote with each pairing.

Xavi Morón thinks in terms of texture. Food designer, chef and nonconformist to a brutal degree, let’s say he has his hands in many pies. His 1,200 square foot workspace, housed in a 19th century textile factory, doubles as gallery, photo studio and meeting place for artists, fashionistas, corporate heads and rule-bending soirées. Half kitchen, half hub, half lab – it’s a place where Xavi’s inquisitive mind and nothing-off-limits bravura has led to collaborations with Catalonia’s most celebrated chefs, no small feat in a region home to no fewer than 55 Michelin stars.

Born in Badalona, a suburb north of Barcelona, and freed from the heavy-handed Franco regime that quashed his parents’ generation, Xavi embodies a creative and collaborative ethos not uncommon among thirty-something Spaniards. Like many in the immediate post-Franco years, Xavi was raised prizing individual expression, social inclusion and artistic audacity, a seismic shift that swept across a newly democratic Spain in the 1980s in a movement known as La Movida. Xavi’s older sister introduced him to Depeche Mode, The Cure and David Bowie. Music, drawing and performance filled his home. Of all the art forms, however, it was through food that Xavi found his most personal calling. “Gathering around a table and breaking bread is universal. It’s so basic—and essentially limitless.”

To understand Xavi is to hold up the looking glass and find that not everything is what it appears: a universe where mushrooms glow, olive oil candlesticks are melted and dipped with black bread, and wisps of coffee float overhead like cumulous clouds. With one foot in the industry and the other dedicated purely to conceptualization, Xavi has managed to skirt the hierarchy of professional kitchens and rely on his craft, charisma and close-knit community of likeminded chefs to create magical culinary universes.

Moving into his own space in 2014, which he calls Hidden Factory, Xavi has channeled his spirit of community, creativity and avant-garde flair. Along with friends he recently launched BASC, The Barcelona Arts and Social Club, a collective of artists, chefs and creatives, whose purpose is to explore, experiment and, more than anything, enjoy cuisine. To experience Xavi’s universe is to fall down the rabbit hole and enter a magical realm of possibility filled with kindness and care. No matter the event, everyone will gather around a long table and break bread together.

Xavi has developed a tasting menu exclusively for S.A.L.T. Before the meal, guests are invited to join Xavi on a guided walk through La Boquería, Barcelona’s most iconic food market, to visit purveyors and purchase final ingredients for the meal – from foraged mushrooms and seasonal vegetables to salt cod and fresh oysters – giving guests an insider’s look into his selection process. Following the market, the experience continues in his kitchen just yards away.

Before the launch of this S.A.L.T. Experience, Xavi invited me and a few friends to pilot the meal. As a history, food and music lover I can say that The History of Barcelona in 7 Dishes is nothing short of a multi-sensory master class: from Greco-Roman to Judeo-Moorish, Gothic to Renaissance, Baroque to Modernist and Contemporary. Our meal traced a 2,000 year arc of taste and sound while celebrating the succession of cultures and recipes to which Catalonia has played host.

Xavi has conceived the meal with historical accuracy to reflect what would have been found in kitchens (using parsnips instead of potatoes for the 14th century Gothic course) and the music which contemporary cultures would have heard. Dish after dish – from roasted eggplant, sweet raisins, cured manchego cheese and olive oil for the Judeo-Moorish course; slow roasted lamb shoulder with hazelnuts, mushroom purée and wildflowers encased in earthen clay for the Gothic; risotto with wild pigeon for the Baroque; cannelloni de suquet (traditional Catalan fish stew) for the Modernist, the colorful flower petals mimicking Gaudí’s signature broken tile mosaics – the meal was one big, edible university lecture; a brilliant telling of a city’s history through food and music.

With our plates empty and bellies full, I exchanged looks of surprise and joy with other Silversea guests across the table. From that meal forward not only would we think of Barcelona in terms of those seven mouth-watering courses, but we’d never look at a cloud the same.