Authors
Franz Neumeier
We, the Curious

Our Personal Butler Made Our First Cruise Special. Here’s Why.

For those of us who are experienced cruise travelers, it’s easy to know why this is such a special way to explore the world. And yet for those who have not cruised, it can be hard to understand the world you live in aboard a luxury ship. When we met Johannes (age 28) and Orkan (39) Baerenfaenger, they had just taken their maiden voyage, a 18-day South America honeymoon cruise from Guayaquil, Ecuador, to Fort Lauderdale, Fla., including Central America and the Caribbean as part of the itinerary.

The Baerenfaengers, who live outside Frankfurt in Germany’s Aschaffenburg, tell us they love good food, travel, spending time with friends–new and old–and sports. Actually, they don’t necessarily love the sports, but it means they don’t gain weight while traveling.

We loved hearing their stories about the experience and hope you will too.

It was your first cruise. Why did you decide on such a completely new experience for your honeymoon?

Orkan: Actually, it was the other way around: We first discovered and booked the cruise. Then, as we saw how incredibly luxurious the whole thing was, we thought about this being our honeymoon.

What eventually tipped you to book with Silversea?

Johannes: Silversea has an international crowd onboard. You meet people from the U.K., the U.S., Canada, Europe–basically from all over the world. This said, you meet so many interesting people and make new friendships with people from around the globe. And then, the route excited us. Other cruise lines offer the more interesting routes usually on expeditions but not on classic cruise ships. Silversea’s classic ships were a bit more appealing to me compared to others. I found the style more beautiful, more subtle, instead of that instead of that “bam-in-your-face” style of luxury.

Orkan: A bit of an understatement!

What made you decide to choose a cruise in the first place? 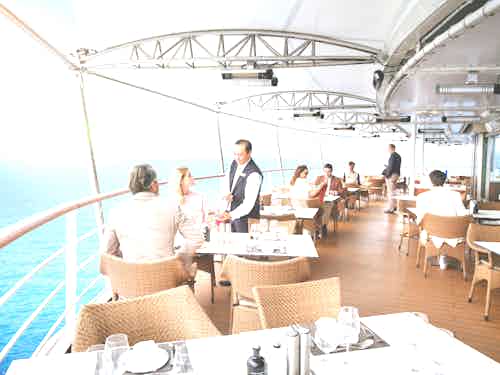 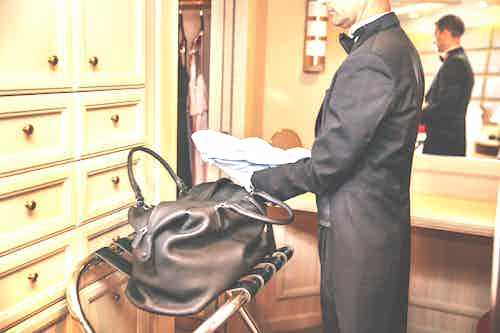 How Do You Become a Butler?

Orkan: I was basically against cruises before because of the big cruise ships carrying thousands of people. But then I saw Silversea. At that time (during the pandemic) we were looking at Silver Shadow from Mumbai to Singapore, which later we had to rebook. I’m a quality engineer by profession, a test manager, and I have a special eye for detail. First, I watched videos from YouTube, many of them terrible, because they were forever filming their cabin, opening every single drawer and so on. I’m interested in other aspects. But that was still a good start, and I then realized that the values this cruise line emphasizes are completely different.

How did you research the trip?

Orkan: We really researched online for a long time, mainly on YouTube, especially: “What is included with the fares you pay on different cruise lines?’ Before this cruise, we had already tried out various luxury hotels. We don’t want to focus our vacation on “bling-bling luxury,” with a lot of gold and so on, but we do attach great importance to good service.

Johannes: We initially had a few cruise lines on our short list. One, for example, has somewhat bigger ships, and the inclusive services were described in the most complicated way, depending on the cabin category. But I actually want to make a trip where I book and then everything just fits. So the concept of Silversea has convinced us: You go on board and don’t have to worry about anything. Everything is included. Well, except for the spa.

Planning the trip was not easy because of the pandemic. What was your experience like?

Johannes: At the very beginning, we just sent a request via the form on the Silversea website, writing that we were interested in a cruise. Eventually how we were dealt with by Silversea’s internal agents after this request strongly influenced our decision to book the cruise. It was a very personal service, no matter how many questions we asked. We always had the feeling that we were really treated like a customer and not like a supplicant. Above all, Jack Sockett, our agent also went far beyond just the booking process. He recommended excursions for each of the ports. He was more of a travel consultant, actually.

And then came the pandemic-related changes …

Johannes: I had became aware relatively early on that the Asia cruise we originally had booked probably would be canceled. I proactively contacted Silversea, and we were easily able to rebook with all our options even before the official cancellation. Then we were told that the Caribbean itineraries would definitely take place….

Orkan: But we had spent time in the Caribbean and wanted to see something we didn’t know yet.

Johannes: And there was Silver Moon in South America. For this trip we also recognized that it offered the S.A.L.T. (Sea and Land Taste) program, which we found interesting, because it incorporated food from the regions we visited in South America. And we were interested in the countries: Panama, Mexico, Guatemala. There was really something new to discover.

Orkan: Also, we are real foodies. Food is very, very important to us. On Silver Moon, S.A.L.T. Kitchen was totally fascinating because the menu changed every one of our 16 days to reflect both the region and also the individual ports we visited.

The feeling onboard is quite different among the various luxury and ultra-luxury cruise lines on the market. What was important to you about that ambiance?

Johannes: It’s interesting what brand preferences we both have for hotels. Orkan likes a chain with a more casual ambience, like W Hotels. I prefer hotels like the St. Regis that are a bit more traditional. Silversea turned out to be a good combination of the two: Casual and easygoing but with service just perfect. You have a butler; he does everything for you. And if something needs tweaking, staff and crew respond in a very professional way.

You had some doubts about the dress code, didn’t you?

Orkan: Yes, I actually worried a bit about the dress code before we booked. By profession, we’re both management consultants, so we know what it’s like to wear a suit and tie when with clients. On vacation with a dress code? And in addition, switching between formal, informal and casual? It seemed confusing and you’d need an extra suitcase for your suits and shirts, I thought.

That slowed me down a bit in my euphoria. In the Silversea Passengers’ Group on Facebook, however, I had some chats with people who had always booked on the line, and they ultimately convinced me. They described in detail the feeling there was when everyone was dressed up, shared wonderful photos from elegant evenings on board. Even if I had minor reservations, I wanted to give it a go. It was just one extra suitcase to pack.

How did the dress code feel once you were on board?

Orkan: When I was on board and experienced what it’s like when everyone is dressed up formally or even informally – that really is an appealing ambience.

Orkan: Yes, definitely. You automatically behave differently, for instance, on formal nights, and I liked that, too.

Did you look into the other aspects of the Silversea experience before your cruise?

Orkan: What appealed to me me before booking was that while Silversea is not explicitly adult-only, there was no specific focus on families with young children.

Johannes: We definitely appreciated that it was not a cruise with an emphasis on water slides and so on. The focus is on good food, entertainment for adults, with bars and good cocktails. And there certainly were plenty of activities. We loved the cocktail workshop and wine and Champagne tastings. The S.A.L.T. Lab cooking classes were fun.

As a gay couple, did you worry about tolerance issues?

Orkan: That is important for us, of course. We asked this question in the Silversea Passengers’ Facebook group, having in our minds that there might be some hate or negativity. But we were very positively surprised. Quite a few people contacted us who are also traveling as two men or two women and who have always booked with this cruise line. We never had the feeling that we were ‘different’.

Nowadays you assume this, but, in fact, it still is just not the case everywhere.

What was the most surprising or unexpected thing on board and on your cruise?

Orkan: Before and even after booking, I asked myself the question: What do I actually need a butler for? Well, he simply worked in our suite. For example, our sunglasses were always polished and so on. My personal highlight and a nice surprise was breakfast on the balcony. Not only that, like in any hotel, someone brings a cart with your breakfast items to your room, and that’s it. Our butler also completely set up the table on the balcony. And if we forgot to pick out breakfast the night before, he just brought us something because he knew what we liked. That really was that icing on the cake.

Johannes: What was most surprising to me is that there is no such word as ‘no’ to the customer on board Silversea. No one tells you ‘no.’ They might say ‘we can’t do that today, but we’ll get it done tomorrow.’ Really, you get anything you ask for, as long as it’s reasonable, or course. For example, by default there was only one rosé wine offered for lunch and dinner, and Orkan loves to drink rosé wines. So they came up with two more. No matter what you asked for, they always tried everything to make it happen as quickly as possible.

And what really pleased me is that the first person we met on board was a German, Assistant Cruise Director Verena from Munich, who became a friend. Now in August we will meet her in Germany.

How would you classify the cruise in terms of experience level compared to a luxury vacation on land?

Orkan: Maybe it’s the butler, but Silversea really is at a different level of service.

Johannes: For me the most important difference is that you see much more. Our Thailand on-land vacation was 14 days in a really nice hotel. We did excursions, but somehow we got bored after six days. Onboard Silver Moon, we were never bored, not even on sea days, because there was always something going on. There was always something to do or meet other people. We even threw a party in our suite. And,of course, the shore excursions, always in a different country–that’s the core benefit of a cruise.

What were your best moments on board?

Orkan: What fascinated us very much is that we cruised as a couple, for our honeymoon and wound up making so many new friends onboard.

Johannes: And yet, before we even got onboard we’d already met a lot of people on the Facebook’s Silversea Passengers. Then we met the first of them in person at the airport during a stopover in Amsterdam. This cohesion among fellow travelers is quite nice.

Orkan: For me, the nicest thing was to open the curtain every morning, go out onto the balcony and to see where we are today. I shared pictures of that on Instagram and people would go nuts for it. Once, in the morning just in the wilderness, I saw, from our balcony, dolphins jumping–without actively going on a special boat tour for dolphin watching! It was just happening right there.