In our mission to deliver compelling travel stories that unveil the world’s most captivating destinations, we usually rely on travel journalists, photographers and other professional storytellers who can take us on their journeys of discovery.

And yet, we also know that Silversea travelers like you are perfectly suited to share your own experiences, insights, joys and learnings about the trips you take. You are first-hand storytellers, too, fueled by your passion for discovery, inquisitive nature and boundless curiosity.

That’s why we’re launching a new series,  We The Curious, where we dive into the experiences, anecdotes and advice of travelers just like you. Our first: We talk with expedition traveler Daniel Budasoff, an avid photographer who embarked on a journey aboard Silversea’s Silver Cloud to the remote landscapes of Antarctica.

Travel and photography go hand-in-hand for Buenos Aires native and New York City dentist Daniel Budasoff. More than just a hobby, he likens this creative outlet to a sort of therapy. “I could have had the worst day of my life in the office, but once I get behind that camera lens I’m not thinking about anything else. I relish the idea of just being able to tune everything else out and try to capture that one image that I’m looking for.”

This passion has led Budasoff to the far corners of the world, including the remote shores of the Antarctic Peninsula. Traveling onboard Silver Cloud in 2018, Budasoff found that ability to focus amid the grandeur and serenity of the scenery.

When asked to choose one word to sum up what was the most special aspect of this Budasoff doesn’t hesitate: Access. As a photography enthusiast since the age of 12, he knows all too well the importance of being in the right place at the right time. “To be able to be in a particular spot, for me to be there looking at those incredible mountains, cruising on a Zodiac… that was access.” That was one of the many interesting revelations and tidbits that Budasoff shared on this interview. Reminiscing about his experience, he shares his memories of his unforgettable trip to the White Continent.

How did you choose Antarctica?

I’m pretty impulsive. A close friend who had been on a few Antarctica voyages had suggested we should go, so we did. I’ve done crazy things like that in the past, so this was one of them. And having been born in Argentina, for me it was a thrill to be back in my country for a short period of time. And of course, the opportunity to do photography was also a major factor in deciding to go. It was my first time in Antarctica, and hopefully there will be another one soon.

What were your expectations going into Antarctica?

It was simple really: I wanted to see something different and beautiful. And I definitely got both of those wishes, and also got to spend time with some nice people. So that in itself was a plus. I’m not typically a cruise person; but when I saw the size of the ship and the opportunities it would open for us in Antarctica, I knew it was appealing to me. Here I felt more like an individual: people knew you, you knew the people after a while, I was very impressed by that.

Did anything surprise you about your experience?

I was struck about the fact that we didn’t have any really cold days during the time we were there. It was also very sunny and clear, which I didn’t necessarily expect. The sunny days are nice, but you’re always looking for clouds to break up the sky in order to get the light to come through. But I can’t really complain about those beautiful, bright sunny days. We were even able to wear short-sleeved shirts!

It was definitely special. Being on the Zodiac, on our own group, and having all that silence around us… I really felt like I was special. It was fun to be there and be able to do that. You look at this place and the surrounding scenery, and you realize the magnitude. And then you go home and you look at the map and you realize you were in a dot; you were in one little spot of that whole continent. It humbles you as a human being.

What did Antarctica teach you as a photographer?

More than anything else is to be prepared and be ready to accommodate whatever comes your way. I think that’s part of what we do in life: deal with the situation when you get there. Talking about photography, when you’re out there you often have to think on your feet. That’s what I think that for me was the fun part of it all, the combination of that and being able to just enjoy and be basically out of touch with the rest of the world.

What tips would you offer fellow photographers?

In a situation like this, knowing the mobility factor of being on a Zodiac, and knowing that you’ll be moving a little bit more and the water is a little more choppy, and you’re not always on a steady situation, I would have probably brought some more handheld equipment instead of equipment that needed to be placed on a tripod or monopod. That means smaller lenses maybe, not as long or heavy. But that’s the thing about adapting: If A doesn’t work go to B, and if that doesn’t work then try C, whatever that may be. So the idea of trying to adapt on the run, being able to do things on the run, I think it’s important for a photographer.

Where else would you like to travel in the future?

I’d love to return to Antarctica and explore deeper. I’m really interested in following Ernest Shackleton’s footsteps, some of the islands and places that he had been to. Reading the book The Endurance really opened my eyes to the history of these remote regions and the daring explorations. It makes you realize these people had guts, traveling on a wooden ship going somewhere and not knowing what’s at the other end of the rainbow. You want to see what they went through. Obviously we won’t have our ship get stuck in the ice, but I’d definitely like to see where they were and how they got across the ridge to get to a whaling station for example; I think that would be interesting to me.

The other place I would love to go to is the Arctic. I’m drawn to destinations where you can get away from where everybody else is. 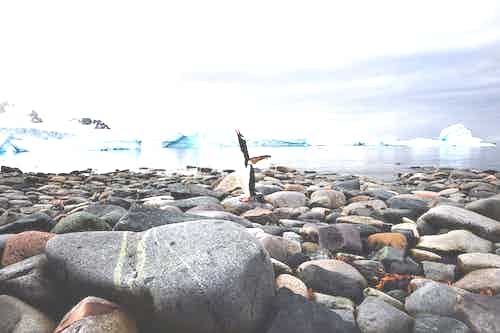 What is one unforgettable memory you brought back from this voyage?

Antarctica is obviously famous for its penguins, and they are truly adorable creatures. So I was able to collect many photographs during the voyage. And, when I got back, I made a photo book for my granddaughter, who was turning three. She loved penguins so it was very nice to be able to do that for her.

A dentist by trade, Daniel Budasoff didn’t choose to make photography his career. But he chose to make it his passion. The 69-year-old Buenos Aires native has had a camera in his hands since he was 12 years old. In fact, at that age he started out with two. Budasoff started with a pair of Kodak Instamatic cameras and embarked on his first photography voyage: a road trip from Miami to Richmond, Virginia, where his father was due to intern as a physician. From then, and by his own account, the equipment has gotten more expensive and his love for photography more intense.