While sitting in a pirogue punted by a local man, I can see through the crystal-clear water down to the muddy bottom of the estuary. I then look across the inlet at the line of dense mangrove forest. Twisted limbs of baobab trees break through the mangrove canopy— a dark contrast to the bright blue sky.

A Western Red-billed Hornbill cries out loudly from a baobab branch before flying away as the crunch of shells announces that my boat has landed ashore. I have just crossed from Joal, a city at the end of the Petite Côteon, to a clam shell island in Senegal.

Fadiouth, an adjacent village attached by a wooden bridge, is also built on an island of clam shells. They have accumulated over centuries of people living on these small islands. The sound of shells underfoot accompanies me everywhere as I explore both islands– they’re on the ground, incorporated into the local crafts, and even in the bricks of the buildings.

Although Fadiouth’s origin story has been lost to time, the Guelowar people from the Kaabu Empire likely settled there between the 16th and 18th centuries. The Serer people, to whom the majority of people in Joal-Fadiouth can trace their roots, however, most likely began moving to the area before that time.

A donkey cart carrying trash passes me while I’m crossing the bridge to Fadiouth. Later, on the bridge between Fadiouth and Joal, women carrying enormous buckets on their heads walk by me like it takes no effort for them at all. Cars and motorcycles are prohibited on the island, so people must transport goods just as they would have in the past.

A Sanctuary for Religious Tolerance

The island that I have arrived on first is home to the town’s cemetery. What stuns me even more than the billions of shells on the ground are the white crosses, marking the graces of Christians, that stick out of the shells. The majority of people in Senegal practice Islam, and separate cemeteries for both religions are common throughout the country, including right across the water in Joal. But this cemetery is a place where people of all faiths have peacefully been laid to rest.

Born on the other side of the estuary from Fadiouth in Joal, Léopold Sédar Senghor became Senegal’s first president after the country gained independence in 1960. He is famous for saying that Senegal is 95 percent Muslim, 5 percent Christian and 100 percent animist. Although the people of Fadiouth probably identify as either Christian or Muslim, the villagers still carry out many traditional practices of the Serer people.

This community has been tolerant of other religions for centuries. In the 17th century, a small group of Jewish people from Portugal lived in Fadiouth since nearby Joal was a significant trading hub. In Fadiouth, they were free to practice their religion and trade peacefully with nearby African and colonial powers.

Fadiouth remains a refreshing display of peace on a coastline that has been marked by religious conflict. In the village, mixed-religion families are not uncommon. Churches and mosques exist for the community as a whole. When it comes time to fundraise for and participate in religious events, everyone –regardless of religion – joins in on the celebration. 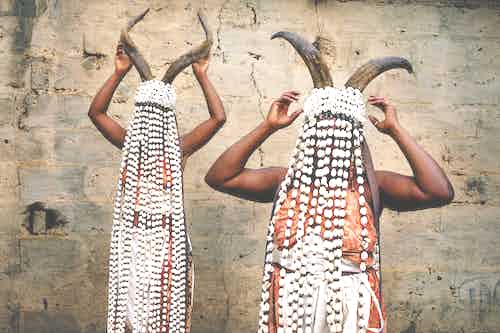 Welcoming Everyone with Open Arms

Today, 90 percent of the 5,000 people living in Fadiouth practice Christianity, which is uncommon in Senegal. Pigs freely roam the town, which is also an unexpected sight in a majority Muslim country where most people do not eat pork. But regardless of your religion, you will always be welcomed with open arms in Fadiouth.

Like in many African nations, 36 different languages are spoken in Senegal, and the locals practice multiple religions and come from incredibly diverse ethnic groups. Various factors make Senegalese society more tolerant than the cultures of neighboring countries, from the way that the government is structured to how race is perceived.

But this peaceful nation shows me that diversity can be overcome and even celebrated. I know that I’ll take these lessons from West Africa home with me. I was surprised and delighted by Fadiouth, and the memories of this tolerant town built on a mound of clam shells will forever endure in my mind.