Like some dream lover, Greek food always sweeps me off my feet. Its deliciousness makes me giddy, my happiness quotient soars to Bhutan heights. Just one briny olive, or a single bread slice swirled into lemony yogurt dip, whisks me to Greece’s endless stretch of turquoise sea, to islands of hilltop villages, where white and blue hues shimmer in the Mediterranean sun.

I’m a geek for Greek cuisine. I have been since I was a kid. Growing up in a Manhattan suburb meant regular meals in Greek family-owned diners. Sure, the cooks flipped burgers and fries, but they also declared heirloom recipes as daily specials – moussaka on Friday, say, or pastitsio each Tuesday. My mom so adored our local diner, she had the owner cater our utterly American Thanksgiving dinner. Giorgos always slipped in his take on Turkey Day trimmings, like dolmades (stuffed grape leaves) and feta chunks, which we gobbled with glee.

Speaking of feta, have you checked out the baked feta pasta recipe gone viral on TikTok? It even sports its own hashtag (#bakedfetapasta). Basically, you bake feta with cherry tomatoes, garlic, and olive oil until tomatoes burst from their skins, feta furiously bubbles, and garlic loses its sting. Toss with pasta like bucatini (typical to Greek cooking), or copy me; spoon the melting cheese and tomatoes atop grilled bread or cucumber slices and swoon over every bite.

If I’ve piqued your interest – and appetite – right about now, please use Greek feta for this easy-peasy dish. Did you know that many countries make feta (fashioned primarily from sheep’s milk), but the tastes and textures are different? Bulgarian feta leans salty, French feta is softer and lacks the intense brine. Greek feta is all sharp, tangy and briny brilliance – like tasting the sea and earth at once. Choose feta packed in brine, not vacuum-sealed plastic packages, more readily found in specialty markets. The salt water brine intensifies the feta flavor and retains the cheese’s texture.

Of course, feta is but one glorious attribute of Greek food. The cuisine’s strength lies in its simplicity, prepared with local ingredients kept close to their natural state. Greece’s idyllic climate allows olive and lemon trees, herbs like oregano and mint, and vegetables such as eggplant and zucchini, to flourish.

Greek cuisine is naturally healthy. With about 20 percent of the country made up of islands, and a mainland possessing a lengthy coastline, fish and seafood are dietary staples. Greeks adore fresh fruits and vegetables, often using meat as an ingredient in vegetable-based plates, rather than the star element. Yogurt and olive oil often find their way into desserts, too.

Greek cooking possesses an astonishingly long history. The story goes that a Greek, Archestratus, wrote the first cookbook in 350 B.C. Makes sense, as Greece already had cooking schools and professional chefs by the time of Alexander the Great. Can you imagine? Wouldn’t you love to jump in a time machine and attend a class?

Throughout Greece, family cooks puts their spin on classic foods consumed throughout the country. Regional dishes exist, too. Cretans make more varieties of kaltsounia (sweet and savory cheese pastries), and produce so many cheese varieties, the island touts nearly one specialty per village. Cretans rival the French in enjoying snails; cooks often fry them live and douse with red wine vinegar.

Northern Greek dishes leans spicier than island cooking, while in the sparse rocky Aegean isles, foods are simpler – lots of vegetable and bean dishes. Corfu, occupied by Venetians for more than 400 years, reveals a cuisine heavily influenced by its former rulers.

Many iconic dishes are not only popular throughout Greece, but probably, in your home country restaurants, too. Take moussaka, my personal favorite. Yes, this dish is rich and heavy, but it’s seriously yum. You fry eggplant (I broil mine for a healthier take), layer it with cinnamon-scented meat sauce, and top with bechamel before baking. Some cooks add thinly sliced potatoes, others use ground beef rather than traditional lamb. Pastitsio, the other divine heavyweight, is akin to moussaka, with pasta switched out for eggplant. Think of it as Greek lasagna. 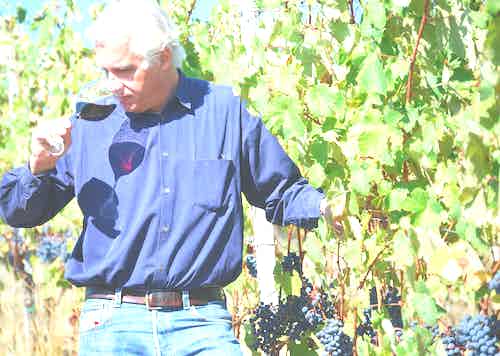 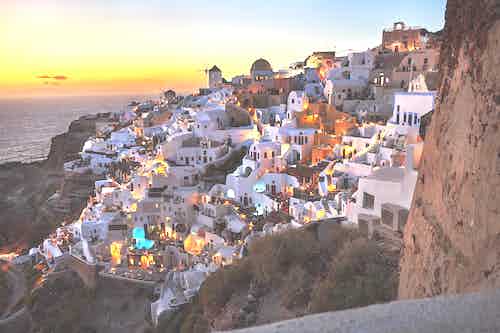 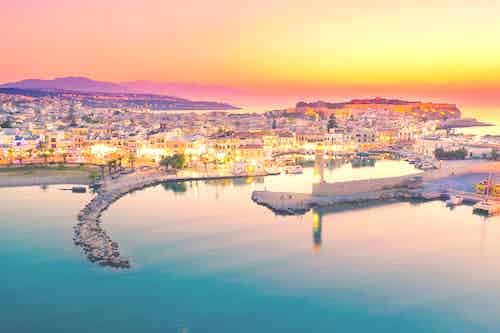 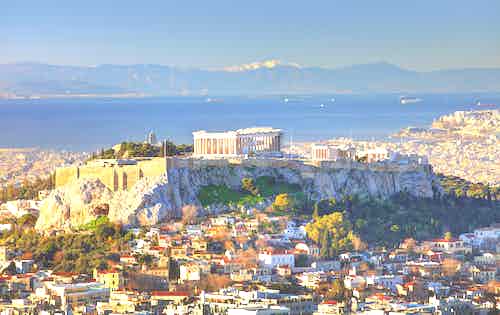 Travels with Fernando: An Athenian Homecoming

Frankly, I could just sit with a glass of chilled white wine, a basket of freshly baked bread, and feast only on small plates, known as mezethes in Greece. (You may also know this meal as meze or mezze.) Some plates are served hot, others chilled or room temperature. Count on olives, rice-stuffed grape leaves, feta, and various dips among the offerings.

I can’t get enough of the creamy yogurt-based tzatziki, and taramosalata, carp roe whipped with olive oil, lemon juice, minced onion, and crustless bread. I loved grilled octopus until I wept over the must-see Oscar-winning documentary My Octopus Teacher, so now I order tiropita or spanakopita, both triangular-shaped filo dough “pies,” stuffed with cheese or spinach, instead.

By the way, did you know that in Greek, pita actually means pie or pastry, not flatbread as we know it? In Greece, pita bread is usually called Arabian bread, and Greeks fashion their own take on it for gyros. When dining in Greece’s restaurants, you’ll likely be served dense, crusty country bread, instead.

And while on the subject of pie or pastry, toss me overboard if I don’t praise Greek desserts. Both Turkey and Greece claim baklava as their invention, but biting into this layered filo dessert, stuffed with nuts and sweetened with sugar syrup or honey, sends chills down my spine. That said, adventure beyond baklava – if you can – and sample equally rewarding lesser known sweets, such as galaktoboureko, semolina custard baked in filo, or yiaourtopita, citrus-scented yogurt cake served with Cognac syrup.

I suppose I’ve made it clear that I live for Greek food. In fact, please excuse me now as I must char some pita and whirl up some taramsalata. Writing about Greek cuisine makes me – and I hope, you – incredibly hungry and oh-so happy.