Monuments to Faith and History: The Mosques that Explain Istanbul

They loom above an ancient city, their towering minarets dominating the skyline. As some are up to 1,500 years old, they have survived wars and revolutions and were borne by mighty empires that came and went. Collectively they represent what has acted as the bedrock of Istanbul for more than 500 years: the religion of Islam.

The mosques of Turkey’s largest city are renowned throughout the world for their enormity, grandeur and deep historical significance. Visitors descend upon Istanbul not only to admire the complexity of their architecture and the splendor of their interior designs, but also to learn about their intriguing backstories.

When I arrived in Istanbul, I wanted to explore these mosques above all else. Over my two days in the city, these places of worship revealed to me the tumult of the Byzantine era, the substantial societal shifts that followed in the 15th century, and how Islam helped glue the nation back together.

The Cathedral That Became a Mosque

There was one mosque, in particular, that was calling me. I remember first seeing a photo of Hagia Sophia at least 20 years ago. With a massive domed roof surrounded by four sky-scraping minarets, it looked like no building I had ever seen while growing up in Australia. While our religious structures were small and understated, this one was giant, bold, and as gorgeous as a setting from a Hollywood fantasy movie.

It took me two decades, but I’m finally here, standing inside Hagia Sophia’s main prayer hall. So distant above me is that 105-foot-tall domed ceiling that it makes me feel insignificant. Decorating it are a host of intricate yet complementary designs. Swirling Arabesque patterns are flanked by gilded tile mosaics, delicate stonework, hand-painted murals and the pleasing symmetry provided by more than 30 arched windows.

Just as inspiring as its appearance is the remarkably deep history contained within this masterpiece. The last 1,500 years of life in Istanbul are outlined, in broad terms, by this sixth-century mosque, which has become one of the city’s chief tourist attractions.

When Hagia Sophia was first constructed, Istanbul was not Istanbul, and Turkey was not Turkey. Instead, the city was called Constantinople, and it was the capital of the powerful Byzantine Empire. Ruled by Romans, this empire controlled a vast area that included parts of Italy, Greece, the Balkans, northern Africa and what is now Turkey.

Because the Byzantine Empire was associated with Eastern Christianity, the Hagia Sophia was built as a church. Built alongside the Great Palace of Constantinople, it became the world’s largest cathedral, taking six years to complete in the year 537 even with a workforce of 10,000 laborers. A century later, the city was about to go through a cataclysmic change.

Inside the Hagia Sophia, the men standing near me with their heads bowed wearing their traditional knitted Islamic kuffis help signify what occurred at that time. After more than 1,000 years of Christianity and Byzantine rule, the city was captured by the Ottoman Empire in 1453.

Constantinople soon became the capital of this Islamic empire, and the Ottomans eventually grew extremely powerful. They ultimately controlled territory in what is now the Balkan Peninsula, the Middle East and Northern Africa.

The Ottomans poured their accumulated wealth into their new capital and built dozens of beautiful mosques across the city. I had stumbled across one of these early Ottoman examples by accident on my first day in Istanbul, as I was walking from my hotel to the Hagia Sophia. In 1491, as the Ottomans were reshaping the city in their image, Firuz Ağa Mosque was built to honor a senior aide of Sultan Bayezid II, the ruler of the Empire. Instantly it reminds me of the building that I’m heading to see, the Hagia Sophia, thanks to its multiple roof domes and graceful, slender minaret.

Later that same day, I realize it is most similar to the gigantic Suleymaniye Mosque. Its namesake is the Ottoman ruler who presided over the empire’s aggressive expansion in the early-to-mid 1500s. I didn’t think anything could match the Hagia Sophia; after finally seeing it in three dimensions, I sensed that each mosque I witnessed after that would be underwhelming by comparison. Suleymaniye Mosque proved me wrong. Perhaps, given it was built for a leader called Suleiman the Magnificent, I should not have been surprised by its grandiosity.

On either side of its high central dome are minarets that stretch 243 feet (74 meters) into the sky. Sultan Suleiman wanted this mosque to represent his immense power and, even today, its scale is staggering. Inside I find it embellished with marble pillars, plush wool rugs, intricate stonework, hypnotic mosaic patterns, colorful stained-glass windows and gilded decoration.

The mosque, built in the 1550s, is ostentatious. And its location is equally spectacular. The hillside perch affords me sprawling views of downtown Istanbul, across the Bosphorus Strait to the city’s densely-populated northern suburbs. Istanbul is now a mega-metropolis home to 15 million people. Back when Suleiman became the Sultan of the empire, in 1520, the city was comparatively small, home to less than 1 million people. But Suleiman had grand plans. Under his aggressive leadership, the Ottomans seized Hungary and swathes of the Middle East and North Africa. By the time he died in 1566, they were one of the world’s great powers.

The bold expansion strategy pursued by the Ottomans also left them open to losses. Perhaps the most famous building in Istanbul, the Blue Mosque, was constructed as an attempt to reassert Ottoman glory in the wake of a crushing military loss to the Persians in the early 1600s.

Built on top of the demolished palace of the Byzantine dynasty, Sultan Ahmed Mosque, popularly known as the Blue Mosque, symbolized Ottoman supremacy and control over Constantinople. These days it is a major tourist drawcard. When I arrive at this mosque, I find myself amid such a large group of visitors lining up to enter; instead, I sit outside and wait for the crowd to thin out.

Pausing gives me ample time to absorb its majesty from up close. Inspired by the Byzantine architecture of the Hagia Sophia, which stands opposite it, the Blue Mosque is topped by no less than 13 domes and six minarets. That may sound excessive, but in reality, I found its elaborate design to be balanced and elegant. 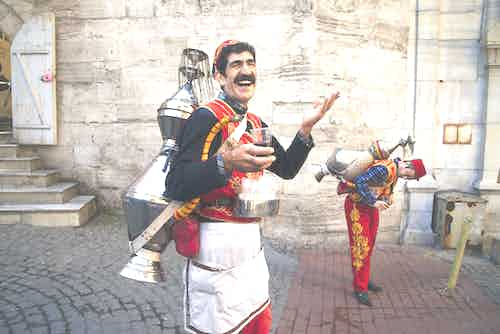 Once I made my way inside, I was beguiled by the blue Iznik tiles that decorate its interior walls, each one painted by hand. Made from quartz, rather than clay, they are adorned by complicated floral and geometric patterns. These unique tiles are a key reason the Blue Mosque is widely considered one of the most magnificent Islamic buildings ever constructed. It remains as a reminder of the might, ingenuity and artistic skill of the Ottomans.

By the time the Blue Mosque was completed in 1617, the Ottoman Empire had survived more than 160 years of turmoil. It had cemented itself as a tremendous force in the region. It remained so until 1923 when it became the nation of Turkey. Underlying all of this progress and achievement in the last six centuries has been the Islamic faith.

As I leave from the Blue Mosque and prepare to fly home, I realize Istanbul’s mosques have become so much more to me than just glorious pieces of architecture. I see now that they are icons of Islam’s pivotal role in the growth of this ancient nation.