Flanked by the Pacific Ocean to the west and the spectacular Andean Mountains to the east, Chile stretches over 2,600 miles from its northern reaches to the southern terminus of Cape Horn. Here, travelers will discover volcanic and glaciated landscapes forged by fire and ice, view the tenacity of life in jungle and desert and experience the elemental beauty of water and stone. This South American paradise is punctuated by vast yellow grasslands, tumbling turquoise waterfalls and soaring granite spires. Although Chile’s extreme environs pose distinct challenges for all inhabitants, humans included, the resilient Atacama Desert flamingo is one creature who can adapt to even the harshest of them all.

Chile’s hardiest avian denizen is the most visible inhabitant of the desolate Atacama Desert. The unmistakable pink flamingos stand out against the lunar landscape, which is dotted with saline lagoons of emerald hues, distorted by heat waves rising from glistening salt flats and framed by snow-capped mountains. In fact, the vast salt flats of Los Flamencos National Reserve, named for the bird, are home to all three known species of flamingos in South America: the diminutive James’s, the sizable and brilliantly pink Chilean and the yellow-legged Andean. Unique adaptations enable them all to thrive side by side in the driest non-polar desert on the planet.

Why Are Flamingos Pink?

Although flamingos flourish in a variety of habitats ranging from coastal and lowland lagoons all the way to alpine lakes in the Andes, they are mostly restricted to alkaline and saline wetland environments. Flamingos, which can live for up to 50 years, choose a wetland based on the availability of resources, according to Silversea’s Ornithologist Dr. Danae Sheehan. “Flamingos only occupy sites which have the right conditions to provide them with an accessible and plentiful supply of food,” she explains. The Chilean flamingo, the largest and most common species, in particular, bases its altitudinal migrations primarily on seasonal food availability.

That food gives those famously pink flamingos their signature hue. “[It] comes specifically from the red carotenoid pigments, such as canthaxanthin, which they metabolize and deposit in the feathers, facial skin, and elsewhere, such as the blood, liver and fatty tissue,” she says. “These pigments are widely distributed in many of the flamingos’ prey items, including algae and diatoms, not just brine shrimp.” While a diet heavy on brine shrimp (also known as sea monkeys) is regularly credited with being the critical determinant of color in flamingos, it’s actually the highly varied diets of the different species.

The Unique Adaptations of Chile’s Flamingos

To make the most out of the scarce resources available in the Atacama Desert, flamingos have evolved to possess a range of specific physical attributes. While all flamingos have beaks with filter plates, their size differs among the three species, allowing them to coexist and not compete for food resources. Their tongues can pump up to six times per second to separate their microscopic food sources from silty pools in the salt flats. They also have the longest proportional neck of any bird, which enables them to spot approaching predators and probe deeper water in search of food.

Several other unique adaptations allow the Atacama Desert flamingos to flourish, such as a special gland located behind the eyes. It enables the birds to process and drink salt water and tough skin allows them to drink hot spring water that is near boiling point. These physical attributes are all-important when living in an environment dotted with volcanoes and salt flats.

In the circle of life, breeding leads to eggs and those eggs require nests. Chile’s flamingos nest in colonies. In some of the larger salt lakes, all three species co-occur and nest side by side. Like 90 percent of avian species, flamingos are monogamous. “The female chooses the nest site, which is vigorously defended from birds nesting close,” Sheehan explains. 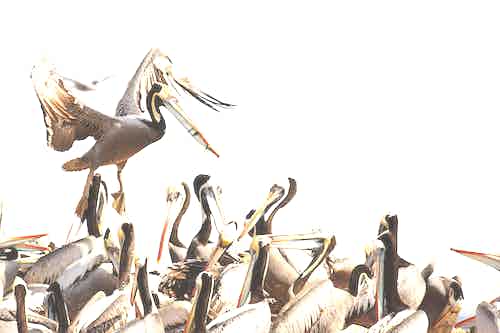 How the Peruvian Pelican Reflects Changes in the Environment

Both members of a mating pair participate in building the cone-shaped mud nest, which can reach over a foot in height to protect the nest from flooding. “After the female lays a single egg, both birds incubate it for around a month before it hatches,” she continues. “Nesting is synchronized so that all young hatch around the same time, making it harder for predators to single out an individual.” To protect their young and survive temperature fluctuations, a colony of flamingos will gather in tight groups and collectively move about a body of water, preventing it from freezing while stirring up food items.

Although it’s possible to spot these vibrant pink flamingos in the Atacama year-round, you’re most likely to catch large numbers of them gathering in the Salar de Atacama during the Chilean summer, which occurs from December through February. Flamingos, who are always preoccupied with food, have a nonchalant attitude when it comes to humans. And all the wildlife enthusiasts and photographers who want to get up close and personal to these incredible birds are thankful they do.