How the Peruvian Pelican Reflects Changes in the Environment

Earlier this year, Dr. Danae Sheehan, a conservation ecologist who has led Silversea trips for four years, stood aboard a Silversea ship traveling towards Lobos de Tierra, a speck off the coast of Peru where the sun scorches the guano-splattered red earth. There’s not even a hint of vegetation on the island; it’s about as inviting as the surface of Venus.

Yet, it’s home to Peruvian Pelicans: peculiar looking birds that resemble a Picasso sketch with their long, curving necks and dark, oval bodies. A brilliant white stripe runs from the top of their bill up to their crown and, during breeding season, their pouch turns blue. They breed in colonies, often on off-shore islands like this, laying two or three eggs in a nest on the flat ground.

As the ship approached, Sheehan noticed a large mass about three miles long on the screen of the ship’s radar. And it wasn’t coastline. “Looking from the bridge with binoculars in the direction of the detected object, we saw that it was, in fact, a long column of pelicans, flying in a line back to the island,” she recalls. “I’ve never seen anything like this.” Sheehan piloted a Zodiac to a landing point on the island. It’s one of her favorite places in the world to see birds.

While Peruvian Pelicans make forbidding islands like Lobos de Tierra home, they are threatened by a combination of natural weather patterns and man-induced climate change. They also contend with overfishing of their prey: Small fish that circulate near the cool surface waters of the cold current that runs along the South American coast.

Facts About the Peruvian Pelican

Peruvian Pelicans were once considered a subspecies of the Brown Pelican, but genetic evidence indicates the two species split about 1 million years ago. They are much larger, ranging from about 11 to 15 pounds (5 to 7 kilograms) compared to Brown Pelicans that weigh up to 8 pounds (roughly 3.5 kilograms). They use their pouches to ferry material – sticks, seaweed, stones, shells and sand – back to their nesting site. They are often found much farther offshore than the Brown Pelican and feed in groups by scooping up fish while floating on the surface, like mini-trawlers hauling in nets.

Their feeding method means Peruvian Pelicans are particularly susceptible to natural variations in El Niño, a semi-regular environmental pattern. During an El Niño season, a warm band of water develops in the central Pacific, including the area off the coast of South America.

The pelicans thrive in waters along the coast from central Peru to central Chile, where the Humboldt Current creates the conditions for one of the world’s most productive ecosystems and fisheries. The cold current flows north along the South American coast, creating unusually low sea surface temperatures off the coast of Peru. While the current proves to be chilly for surfing or swimming, it is perfect for the upwelling of colder, nutrient-rich waters that would otherwise flow deeper. Upwelling stimulates the growth of phytoplankton, which feeds a dense food chain of fish and higher predators, including birds. Among the fish that thrive are anchoveta, a member of the anchovy family that grows to 8 inches and is a favored delicacy of Peruvian Pelicans.

“The sea off the coast of Peru supports a vast amount of life, because the world’s most productive coastal upwelling region lies off these very same coasts,” says Sheehan, who used to oversee a migratory Africa-Eurasia bird program for the Royal Society for the Protection of Birds before becoming an Expedition Expert for Silversea. “This is an amazing place for birds such as pelicans to live because they don’t need to go very far to find food,” she adds. “It’s right on their doorstep.”

Peruvian Pelicans feed by scooping up fish with their beaks while floating on the surface or by making shallow dives. In contrast, the Brown Pelican dive-bombs from a height. Normal conditions along the coast and further offshore mean abundant prey for both species — until there’s an El Niño year.

During an El Niño season, the westerly winds weaken causing the upwelling to cease and the surface water temperatures to rise. In the strongest El Niño years, the trade winds collapse and change direction. According to the National Oceanic and Atmospheric Administration, El Niño years have occurred three times since 2009, most recently in 2016.

Those warmer waters essentially close the fishing grounds for the Peruvian Pelican. “[They’re] dependent on an abundant supply of fish near to the surface of the water, within a beak’s distance or a little dip dive, but certainly no more than six feet,” Sheehan explains. “In El Niño years, warmer surface temperatures cause fish such as anchoveta to move down into cooler, deeper water, putting them out of reach.”

Peruvian Pelicans are considered ‘near threatened’ by the International Union for the Conservation of Nature. After a strong El Niño event in 1998, their numbers dropped dramatically. They have rebounded since then but have not fully recovered. Wetlands International estimates a wide range of their numbers between 100,000 and 1 million, which is a fraction of their former population.

“Pelican numbers fluctuate massively in association with El Niño events as adults starve or fail to successfully breed,” Sheehan says. “When researchers looked at the stomach content of dead pelicans that were found during one of these events, they found they were either empty or contained fish that isn’t part of the bird’s normal diet.” 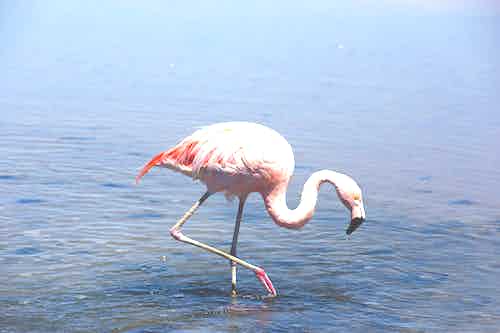 Challenges for the Peruvian Pelican as El Niño Years Intensify

Sheehan says an increase in the frequency and severity of El Niño years, along with overfishing, could impact the Peruvian Pelican population by reducing available prey. That’s just what early research into the effect of climate change shows. Scientists caution that they are just beginning to understand the impact of the changing climate on natural variability like El Niño, something that has been occurring for thousands of years. Fishermen off the coast of Peru noticed periods of warmer water and El Niño weather – rainfall in the deserts – hundreds of years ago. Francisco Pizarro of Spain documented the effects after making landfall in 1525.

Pelicans, Sheehan adds, are notoriously susceptible to habitat disturbance. So an increase in tourism near the breeding sites or development near those areas would be a problem. “With changes like these,” Sheehan says, “population recovery following periods of decline is much less likely and the overall population would gradually reduce.”

Don’t count them out, though. Pelicans have existed for at least 30 million years, according to the fossil record which dates from the Early Oligocene. And Sheehan remains particularly fascinated by any bird, like the Peruvian Pelican and Chilean Flamingos of the Atacama, that manages to live in a relatively extreme environment. “They exhibit extraordinary adaptation which enables them to not only live but thrive in places that other birds would find inhospitable.” Above all, the Peruvian Pelican is a survivor and we shouldn’t count them out for surviving another 30 million years, at least.