Discover Port Stanley, the Capital of the Falkland Islands

The Falkland Islands, lying roughly 300 miles (480 kilometers) to the east of the rugged southern Patagonia Coast, are one of the most far-flung destinations in the world.

Their capital, Stanley or Port Stanley, located on the far east coast of the islands, is surrounded by rolling green hills and the raging South Atlantic. Cruises to Stanley unlock unique experiences for travelers: “It’s more English than England, with its own special twist,” says Victoria Salem, a Silversea Expedition Expert and Historian. “Port Stanley manages to retain its Old World charm, its singularity, without stagnating.” Union Jacks swing in the breeze, revealing a deep-rooted British identity that persists, despite being an ocean away from Great Britain. Bars serve traditional pub fare with a pint of local beer.

Due to their geographic isolation and mixed population, Falklanders have developed their own traditions. While many Kelpers, as residents of the islands call themselves, have English roots, their proximity to South America also impacts their culture.

That Sense of Community

For Rachael Crowie, a marketing officer for the Falkland Islands Tourist Board, Stanley’s size fosters a feeling of belonging to part of a community. In 2016, census officials recorded a population of just 2,460 people living in the town.

“Stanley is small enough that everyone knows each other. There is a great sense of community and wellbeing in this small city with 77 percent of the total of the population living in this urban space surrounded by unique wildlife and epic views,” Crowie explains.

Known for its colorful houses and immaculate gardens, the waterfront greets visitors with a bouquet of red, green, blue and orange façades. Many Port Stanley attractions are nestled along the coast or tucked away on idyllic country roads.

“Lose yourself in the grid of backstreets, and you may come across a garden packed with cheeky gnomes,” says Salem, referring to the town’s known penchant for decorating its green spaces. She also recommends visiting Christ Church Cathedral, the world’s southernmost Anglican cathedral. The building is constructed with gray stone and lined with a reddish trim. In front of the church is a whalebone arch made from the jaws of two blue whales, which was installed in 1933 to commemorate 100 years of British rule on the islands.

“I love ambling along the waterfront,” adds Salem. “You pass nearly all of the town’s major tourist sites as well as its buildings of local interest.” The Historian also enjoys visiting the post office, which features a philatelic counter, Port Stanley’s beach and the office of the Penguin News, the islands’ only newspaper.

Caught between the United Kingdom and Argentina

Port Stanley doesn’t only provide travelers with a delightful day of strolling along the sea—it has also been at the heart of a fascinating history. Since the 19th century, the Falkland Islands have found themselves at the center of a tug-of-war between the United Kingdom and Argentina, which also claims sovereignty over the territory.

Argentinian forces occupied part of the island in the spring of 1982 to annex the Falklands, which it considers to be illegally occupied by Great Britain. British troops ultimately defeated Argentina in the Falklands conflict that lasted two months. “It’s been 37 years since the Falklands Conflict. In that time, Port Stanley has re-invented itself as a modern town. It has become more confident and created a unique 21st-century identity,” explains Salem.

A referendum held in 2013 found that 98.8% of Falklanders supported remaining a British overseas territory, a status it has officially held since 1833. The Falkland Islands Museum is a great resource to dive deeper into the local history, including the Falklands War and the islands’ role in both World Wars. Established in 1991, it aims to preserve and record the region’s heritage.

Crowie, from the Falkland Islands Tourist Board, describes the museum and its historic dockyard as being among the best things to do in Stanley. “It’s a perfect half-day visit to take everything in. [The museum staff] are also the key keepers of the Lighthouse at Cape Pembroke and run daily tours to Cartmell Cottage throughout the season,” she says.

Known for its craggy cliffs and seas of varying shades of blue, nature continues to shape the existence of both humans and animals on the Falkland Islands. The area is one of the best places in the world to get up-close with penguins, orcas, seals, sea lions and dozens of species of birds. 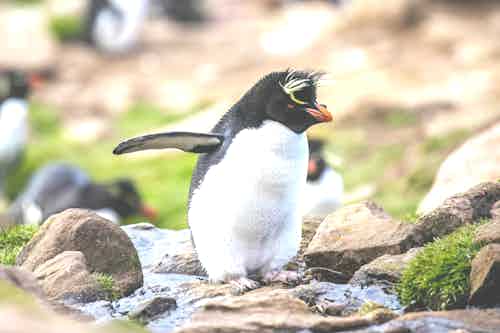 This magnificent connection to nature can also be found in Port Stanley, where reindeer have been brought in for a particular purpose. “If you’re lucky, you will see a reindeer in a nearby garden. A few have been transferred to Stanley from South Georgia and are used as lawnmowers,” Crowie explains.

The reindeer were transferred to the Falklands from the island of South Georgia in 2001 and 2014, as part of efforts to improve the health of the grassland and to raise them for meat.

While the town is picturesque and surrounded by stunning views, Crowie says that Port Stanley’s real treasure is its people. “It’s how friendly and hospitable the locals are,” she says. “The Falklands are a relaxing, safe place and everyone will go out of their way to make you feel welcome.”