Admittedly, I am passionate about islands and island life. Lucky enough to grow up in Hawaii, this petite passion later metamorphosed into a well-honed obsession. Not just the tropical wonderland I called home for so many years, but all islands. Whether near, far, cold, warm, large, small, inhabited or not. From Alcatraz to Zanzibar and dozens in between, traveling to and experiencing them has been one of my life’s greatest joys.

After an autumn sojourn in Portugal, recently named number one country destination in Condé Nast Traveler 2021 Readers’ Choice Awards, I discovered the semi-tropical island of Madeira. A Portuguese autonomous region, with its own parliament and president, it’s part of a North Atlantic archipelago closer to North Africa than Europe. Though small – Madeira is just 35-miles long by 14-miles wide – with a population of 250,000, it has a charming capital, excellent cuisine and of course, Madeira wines. Its volcanic genesis and relatively isolated location, provides dramatic natural geography resulting in awe-inspiring architectural and engineering marvels.

Food and fun in Funchal

Funchal – where most Madeirans live – has basalt and limestone cobble-stoned streets and red-tiled roofs in structures that seem impossibly built into hillsides. Downtown is a stone’s throw from the cruise port, so Funchal is best enjoyed on foot where cafés, restaurants, and its major historic attractions such as the Sé Cathedral can be easily explored.

The Portuguese in general are rather obsessed with pastries and coffee, and Madeirans are no exception. Indeed, most social discourse occurs with pasteis de nata – Portugal’s signature egg custard pastry – and espresso or café com leite. A bakery on nearly every corner, sometimes two, entice even the most strident carb-avoiders. Trying pasteis at several different bakeries and cafés, I can vouch that each was my favorite. Funchal’s Ritz Café is great for people watching, high tea and art lovers as the building’s exterior, punctuated with blue-and-white 20th century Azulejo tiles, reflect old Madeiran life.

Foodies that love to dine with a constellation-like view will rejoice at Galàxia Skyfood on the top floor of The Savoy Palace Hotel. With a starlit ceiling overhead reminiscent of a Rolls-Royce headliner and wide-angle views of the Atlantic abyss, a sense of suspended animation ensued while devouring a four-course menu under the direction of Chef César Abreu paired with wines selected by Sommelier André Ferraz. It’s no surprise that there are Michelin mumblings on Galàxia’s horizon.

In Old Town, Rua Santa Maria is known for its artfully painted doors ­– there are over 100 – but in the evenings it pulses with lively outdoor cafés, bars, and restaurants. A typical Madeiran dish of espada preto – black scabbard – is tender and delicious, especially when served with bananas and passion fruit sauce as I enjoyed at Santa Maria Restaurant. Scabbard, a deep-water predator fish has a slithery, eel-like shape and elongated face with ultra-sharp dentition that perhaps only a fish mom could love. I’m glad I ate it before seeing it whole on ice.

Just below Old Town, the Teleférico do Funchal provides a scenic 15-minute cable car ride 1,800 feet up to Monte Palace Tropical Gardens. One of the world’s best botanical gardens, it’s a hilly, globe-trotting adventure ­– no passport needed­ – with tiled renditions of the Portuguese era in Japan, grand Chinese gates and bridges, a plethora of swans, ducks, waterfalls, statuary, and allegedly, the world’s tallest ceramic vase. There’s also a museum with a compelling collection of Zimbabwean stone sculptures and a mineral and gem exhibit.

Nearby the twin-towered Church of Our Lady of Monte is perched hillside. Next to its nave rests the crypt of Charles I, the House of Hapsburg’s last monarch. In the reshuffling aftermath of World War I, he was exiled to Madeira in November 1921 and died of pneumonia in Monte five months later.

An experience unique to Madeira is the 1.3-mile toboggan ride from Monte to Livramento. Seated in a modified wicker basket, two men rope steer from behind as the toboggan speeds downhill on a smooth, steep, narrow trajectory. Did I mention the coachmen have only the thick soles of their rubber boots to brake? ­Once described by a CNN reporter as “One of the world’s coolest commutes,” I would add terrifyingly, yet exhilaratingly fun. I also hope the coachmen’s cobblers receive a hefty premium in braking gratitude.

The wines of Madeira

Wine is an integral part of Madeiran history replacing sugar as its economic mainstay. It’s also part of island geography. Outside Funchal, terraced vineyards sit on every inch of available land in competition with ubiquitous bananas. A good place to appreciate how wine shaped Madeiran life is at Blandy’s Wine Lodge in Funchal.

Established in 1811, Blandy’s original main structure was at various times a prison, church, monastery, and hospital. Today one-third of Madeiran wines are produced by Blandy’s. Only those wines fortified with 96-percent grape alcohol spirits, are oxygen exposed and locally produced can claim the Madeira wine moniker. Over the years, Blandy’s has influenced Madeiran life as the family’s involvement stretched to include shipping, hotels and newspapers. After viewing excellent photographs reflecting Madeira’s wine history evolution, I enjoyed the sweet nectar in Blandy’s tasting room.

In addition to sweet, fortified wines, a handful of smaller boutique wineries around the island produce very good table wines. At Quinta do Barbusano, in the north near São Vicente, proprietor António Oliveira in 2006 made wine-making his second career. Tasting several bottles of his bounty, favorites were his 2015 Ponta do Tristao, a perfect marriage of Portuguese Verdelho and German Arnsburger grapes, and an excellent 2017 Tinta Negra Aragonez, a Rosé much darker and fuller bodied than traditional ones. Though Barbusano produces just 90,000 bottles a year resulting from 61-acres under vine, his labor of love is lovely. 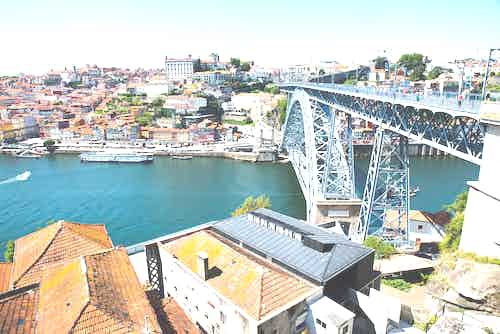 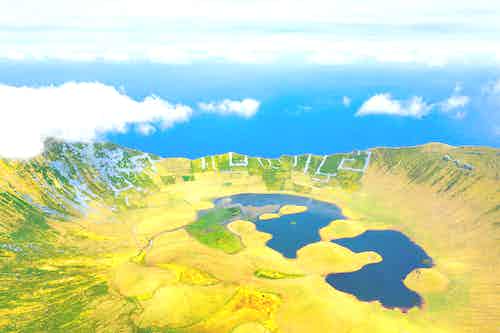 Adventure in the Atlantic

Madeira has seven microclimates. Generally, the north is rainy and lush while the south is sunny and dry. To distribute the north’s life sustaining liquid to irrigate sugar plantations, 16th century Madeirans started developing a unique system of channels and aqueducts. Today these levadas, covering over 900-miles, provide water to vineyards, farmers, and gardens. Several of the 200 levadas have flat, walkable footpaths alongside them allowing opportunities to see more remote parts of the island, its unique flora, fauna, and abundant waterfalls.

In Madeira’s northeast lies Porto Moniz, a remote coastal village famous for its natural lava rock pools and ethereal scenery. Views were so otherworldly, a lunar landing came to mind. Even though it was cloudy that day, waters were still a balmy 70-degrees. Nearby Seixal beach, the island’s only black sand beach, sits in contrast to towering emerald green mountains and frothing waterfalls.

Madeira has pretty much everything a traveler could desire: good weather, excellent food, a walkable capital and natural adventure aplenty, all set within a dramatic geographical environment. Then there’s Madeira wine. In William Shakespeare’s play Richard III, Shakespeare writes that the Duke of Clarence, King Edward IV’s brother, meets his maker by drowning in a vat of Madeira Malmsey. I suppose if one could select a manner of execution for treason, asphyxiating in a barrel of Madeira wine would probably be ideal.