Debuting on Silver Moon (and expanding to Silver Dawn in Spring 2022), Silversea’s S.A.L.T., which stands for Sea and Land Taste, is an innovative new program celebrating the culinary arts of the places we’re traveling in.  There are four pillars to S.A.L.T. At S.A.L.T. Kitchen, a restaurant dedicated to showcasing food and wine from the region in which the ship is traveling, the regional menu offers daily-changing options based on the port of the day. In S.A.L.T. Lab, guests enjoy the challenge of cooking regional dishes. S.A.L.T. Bar celebrates cocktails made with local ingredients. All aim to bring the experience of life onshore onto Silver Moon.

The S.A.L.T. Experiences program moves in the opposite direction. This exclusive-to-Silversea series of shore excursions, hand-curated by local experts in the worlds of cuisine and wine, offer personal connections to the places we visit. In this series of stories, we share our experiences as we travel through the Mediterranean. We hope you’ll join us.

Today We Are In…Mykonos. One of Greece’s most visited islands, Mykonos, part of the Cyclades chain of islands, owes its popularity to its beaches, nightlife, and beautiful white, flat-roofed houses with shutters of cobalt blue. On other trips here, we’ve admired its iconic windmills, snacked on mezze in Little Venice, its most picturesque waterfront village, and splurged at artisans’ galleries. Today, though, we head up to the hill of Agios Lazaros to learn how to make cheese at Mykonos Farmers.

Why Did S.A.L.T. Experiences Choose Cheese in Mykonos? “Wherever you go in Greece there are these great, simple cheeses made by families and small producers,” S.A.L.T. Director Adam Sachs tells us. “George Syrianos, a third generation cheesemaker, is an ideal host because he’s passionate about the topic. Making cheese and looking after his animals is clearly tied with childhood memories and pride and love for family and local customs.”

And for guests? “Food really comes alive when you have a chance to see it made and described by someone like him,” Sachs adds.

The Tour: Did you know that one of the most famous delicacies of Mykonos is its soft, kopanisti, a spicy cheese spread? At Mykonos Farmers, we take a tour of the cheesemaking facility and then mosey into a charming kitchen space, with a vast island where those of us who want to get our hands into the cheese can take part.

Cheesemaker Yiorgos “George” Syrianos is a big part of the appeal of our time here. Credit some of that to the fact that he knows his way around a story (and another part due to his strong resemblance to George Clooney!) that will make you feel intimately connected with real life in Mykonos. He’ll tell you that he initially refused to become the third generation of cheesemakers in his family and worked as an electrician before some wayward goats showed up…and he wound up adopting them, which led him back to the family path of cheesemaking. 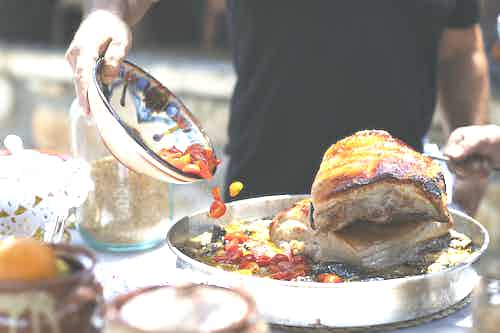 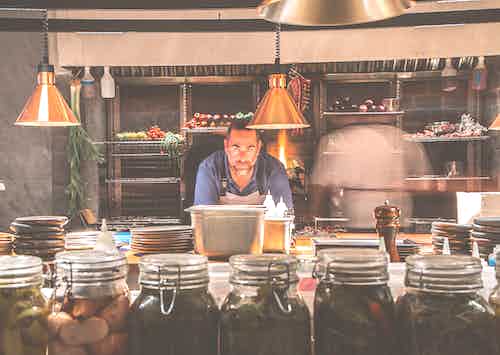 We learn why the organic ingredients he uses, all locally sourced, make for healthier cuisine. We sample house-made yogurt that is the smoothest, creamiest I’ve ever tasted (and you top it with marinated cherries that George has bottled ). We sample Mostra (barley rusks covered with kopanisti and fresh diced tomato). We make an authentic Mykonian onion pie and the sweet, cinnamon- and honey-infused Tsimpita pie, both made with a ricotta-like cheese called tirovolia.

We eat everything we create, accompanied by a fresh, crisp Mykonian white wine.

Inside Tips: Don’t bother with breakfast — and you’ll want to skip lunch too — because it’s a feast. And, get this: You don’t have to love cheese or even care too much about making it to have adored this visit (in fact, one fellow guest told me he was dragged, kicking-and-screaming, by his wife and daughter and he had, he says, “the best time.”). And enjoy the ambience; Perched high on a hill, Mykonos Farmers’ has a lovely stone terrace with breathtaking views over the white rooftops and the Mediterranean Sea.