What’s It Like to Be the Godmother of Silversea’s Silver Dawn?

Nilou Motamed’s third cruise with Silversea, on Silver Dawn’s inaugural voyage, which departed from Lisbon in late March, 2022, was accompanied by a heart-stopping surprise. Motamed, a New York-based food and travel editor, tastemaker, and television personality, tells us that “whenever Barbara Muckermann (Silversea’s chief commercial officer) calls, you know something exciting is going to happen. In this case she invited me to be the godmother of Silver Dawn. As Barbara explained, this new ship is so much about celebrating travel, indulgence, and culinary explorations that she felt ‘Dawn’ and I were a perfect match. Of course I have to agree!”

The contemporary tradition of welcoming new ships into cruise fleets began way back in the mid-18th century. At that time, the role of godmother was meant to signify ships’ female, benevolent spirits. Godmothers, then and today, still preside over a ship’s naming (or christening) ceremony, wishing “her” — and all who sail on “her” — good luck and smooth seas.

Why is a ship referenced as a female? London’s Imperial War Museum, explains:  “Although it may sound strange referring to an inanimate object as ‘she,’ this relates to the idea of a female figure such as a mother or goddess guiding and protecting a ship and crew.”

Motamed says this resonated with her.

“Now I’m obsessively saying ‘she’ — that’s my goddaughter. Besides feeling a real kinship and connection to her, I want to respect the tradition. She is ‘she.’”

Having attended so many christening ceremonies, including Silver Dawn’s recent welcome to the Silversea fleet, we wondered: What’s it like to be a godmother? Motamed fills us in.

“I had this idea that the godmother tradition was largely symbolic, and perhaps a little dated—but having just experienced it firsthand, I actually think there’s something quite moving about the tradition. More than ever in the travel industry, we need to support the people who are making it all come to life. I’ve always believed in the connection that travel affords — meeting people from a range of backgrounds and experiences. All those things come together on a cruise, especially on a Silversea ship. To have the opportunity to celebrate that felt really powerful to me.

“All that wonderful pomp and circumstance of the ceremony was especially poignant this year — it was really about resilience, endurance, and moving forward with a sense of purpose. We need that more than anything right now. As the bagpipers led us into that beautiful theater, it was so moving to feel the excitement and emotion in the room.”

Q: What in line with your own interests and passions makes you feel connected to Silver Dawn?

“Inclusivity, for me, is fundamental to travel. My goal is for people to feel like they’re part of something bigger. In my remarks, I alluded to Chef Jose Andres’ work with World Central Kitchen, performing such vital service to people in need, particularly now with his tireless efforts in Ukraine. What I love about Jose, and about Silversea, is the idea of offering a seat at the table to as many people as we can.

“Travel has always been about this global community we are a part of — the reason I love travel is I want to engage with people I don’t know and make friends wherever I go. Being together again is really meaningful.”

Q: One of the benefits of being a godmother is developing a special relationship with the ship itself. Tell us about that.

“Silver Dawn was the third Silversea ship I’d sailed on in as many years. Once you see everything that goes into it — the engineering; the blood, sweat, and tears of bringing a ship to life through sheer will and imagination; the pride of the captain, the enthusiastic faces of the crew — feeling that I’m in a small way part of that bigger whole was more profound than I could have imagined.” 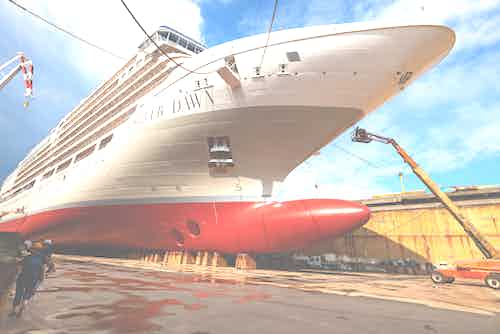 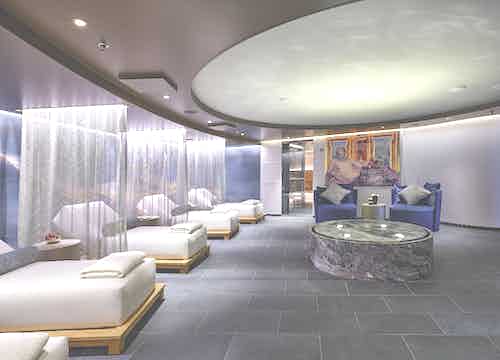 On the bridge, what we call the captain’s ‘office,’ he asked me to sign a piece of steel that was the first steel cut for Silver Dawn. That made me feel part of the life of Silver Dawn from the very first day she began.”

Q: What advice would you give to future godmothers?

“One thing I wish I had known is that your cheeks can hurt from smiling,” Motamed says, laughing. “Another thing is that on any given day at sea it can rain and wind and sun in five minutes so your updos are not safe.

“More to the point, while I consider myself 100 percent a travel expert, I am not a cruise expert. I was grateful that I didn’t know as much about being a godmother because it was intense. People were asking me if I was nervous and I didn’t know I should be so nervous, I didn’t understand the magnitude of the role. If I thought about the pressure, I might have choked. I was happy that I went into it innocently and really felt moved.