The wilds of Scotland offer the adventurous a thrill ride of nature moments, its blustery islands proving popular for wildlife fans visiting from far and wide. And the Island of Lunga, which is home to more than 6,000 birds, welcomes a rather special inhabitant to its shores every year – the Atlantic puffin.

Though they spend much of their life at sea, Atlantic puffins return to clifftops during their mating season to form breeding colonies, their clown-like appearance endearing many photographers and filmmakers when they do.

One of those is Latvian wildlife photographer, Silversea expedition guide and filmmaker, Deniss Elterman who filmed these sea birds nesting and taking off on the Island of Lunga, which is classed as a bird sanctuary.

A location untouched by man

“Everybody knows puffins – they’re easily likable and are just so photogenic,” says Denis, who was traveling on the Silver Cloud expedition vessel during this particular trip in southern Scotland.

“Lunga Island is a breeding colony for a variety of birds such as guillemots, razorbills, shags, kittiwakes and a few others. Yet the very beautiful thing about it compared to all the other places you go to see puffins is that it is uninhabited, so there is no impact from visitors. It is a lesser known place with just a couple of thousand people maybe going to visit it during the spring months when puffins are around.”

Atlantic puffins collect and adorn their burrows with grass ready for when they will lay a single egg, which both parents will incubate. These soon-to-be parents then take it in turns to head out to sea, returning with a beak full of silver capelin fish.

“Puffins have this incredibly designed beak in which they can hold up to a dozen capelin fish and bring them back to the burrow. One of the pair will be waiting at the burrow patiently incubating the egg and waiting for it to hatch,” adds Denis, who has visited this spot on Lunga four times, always observing new behaviors each time.

“Interestingly, puffins always come back to the same burrow, doing their spring maintenance and clearing it all up. They are also monogamous which means that they stick together for a lifetime. They are an idyllic bird and very social creatures that like to stay in this big community,” Deniss adds, the location just a 15 minute easy hike from the zodiac drop off point. 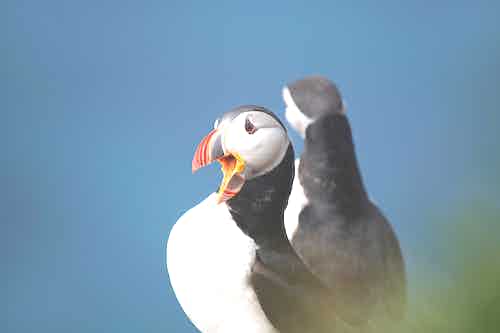 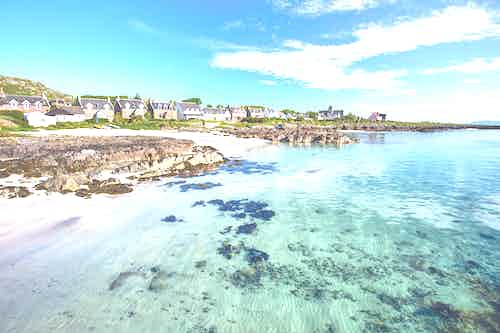 A Virtual Tour of the Inner Hebrides Islands of Scotland, by Victoria Salem

“The challenge of capturing puffins is that they are so indecisive,” says Denis, who filmed them taking flight with his Panasonic Lumix DC-GH5 with a Nikon 200-500mm zoom lens.

“They walk back and forth with their little feet, pluck the grass, then change their mind and go out to sea – it’s just incredible,” he says.

“One minute they flap their wings so you think they’re taking off but they don’t. So you’re sitting there and observing them and it’s incredibly hard to decide which puffin to look at and which might take off the next second.

“But the best thing you can do is just to sit down and enjoy the experience, and just watch one puffin out of them all – it will give you a good idea of what their life is in the colony.”