I love to cook and I travel to eat. Food doesn’t have to be fancy to capture my attention. It just has to be delicious and real, made with care, and, most importantly, have an interesting story behind it. For a long time my job has revolved around wandering, eating and telling stories about the places and tastes I’ve encountered along the way.

As a food and travel writer and magazine editor, I’m not a restaurant critic and what I’ve covered usually isn’t news. My beat is just to go and find interesting tales to tell, to follow food to its source and celebrate the culture of the places I visited and the people I met through the lens of what’s on the plate.

Sometimes that’s meant touring one more posh urban Michelin-starred temple of gastronomy and other times it’s hitting a dozen street stalls in a night in Lima, Peru, to find the best anticuchos (grilled beef heart) or flying to Fukuoka, Japan, to trace the roots of tonkotsu ramen.

And sometimes it means finding myself sitting at a wooden table outside an Alpine lodge, reached by a vertical funicular and a long hike, on the top of a very sunny mountain near the northern tip of Ticino, the Italian-speaking canton of Switzerland and witnessing the singular sight of two otherwise composed and distinguished gentlemen argue fiercely—and nearly come to blows—over the provenance of a local cheese. I’m no sadist but this scene made me so happy. Let me explain.

The lodge’s proprietor, feeling generous and wanting to show off the local speciality, had offered us a taste of his prized Piora cheese, a type of cow’s milk cheese that’s made here at the top of this mountain and nowhere else. I tasted it and was happy (cheese will do that to me). The friend of a friend who’d taken me here wasn’t convinced. He took one bite of the cheese and announced:  “This cannot be Piora.”

This did not go over well. “You think I am lying?” roared the proprietor. “Follow me!” And he dragged us all down to his cheese cellar below the Alpine cabin whereupon these two nice older gentlemen set to screaming at each other passionately about the proper aging and handling of this obscure mountain cheese.

This made me even happier. Now I’m not typically one to take pleasure in a quarrel but what delighted me about this scene was the reminder that there are still places where people really care, that despite the creeping homogenization of everything and the culinary trends that spread seemingly instantly from restaurants in Copenhagen to Santiago, despite that there are still places out there where people take traditional foodways and customs seriously. Seriously enough to stand up and shout about it.

Sometimes friends or strangers will ask where I’m most excited to travel and eat and my answer is always wherever’s next. That’s how and why I got into this business, the desire to go places and experience new tastes, to see food made and talk to the people making it.

And though the current crisis has made this kind of adventure seem achingly out of reach for the moment, that trite answer has always been true: There are a million food stories out there and I’m always most excited when I’m headed somewhere new to dig into the food scene there, to meet the chefs, producers, wine makers and enthusiasts who make it unique and compelling and delicious. 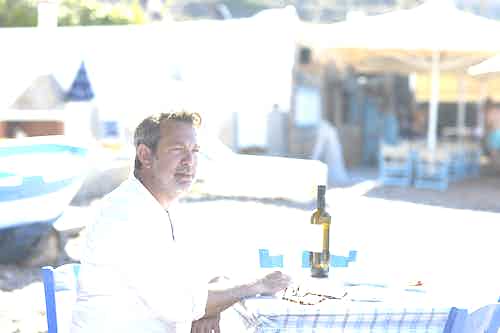 Since joining Silversea, I’ve taken the narrative approach I developed as a writer and editor and applied it to how we develop shore excursions and experiences for the S.A.L.T. (Sea & Land Taste) program that has launched on Silver Dawn and Silver Moon (and next year on Silver Nova). That means viewing a trip to a port or a time sailing in a particular region the way I’d prepare to report a story there: by asking “Who are the best people to talk to, what are the scenes we want to see and what’s the arc of the story that connects the food and drink, cultures and traditions to the places we’re visiting?”

I’m not one for bucket lists but I’ve been lucky enough to have a lot of experiences on the food and wine trail that would certainly qualify. Helicopter ride to a fifty course dinner at El Bulli? Check. Foraging for wild wasabi in rural Japan with Anthony Bourdain and René Redzepi? Yes. Making his mother’s groundnut stew with the actor Idris Elba in a kitchen in London? That too. I’ve had the opportunity to learn from and cook with great chefs, to see how food is produced and made and follow various culinary quests across many continents. And despite the occasional meal soured by too much hype or my own exhaustion, I’ve never grown bored or jaded about these adventures.

What those travels have taught me is that food people are the best people, that farmers and winemakers and chefs and producers of all sorts who make the things that sustain us are compelling and inspiring. These are the folks I’m eager to see and meet and cook with again soon. And their stories are the ones I’m most excited to travel for again and that I am so excited to share with you on our S.A.L.T. adventures.