Authors
Luca Trevisani
We, the Curious

Silversea Cruises is proud to showcase this series of impressions about the Galápagos. The series of three pieces also includes Animal Noises and Espanto y Miedo (Fright and Fear). All originally appeared in Milan-based Cartography Magazine as a result of its journalists’ trips to the Galápagos, where they sailed on Silver Origin.

Our tale of these unique and precious islands could start from the colors, but it’d be too predictable, a list of banal and tired clichés. So we’d be better off not starting from the cobalt feet of the blue-footed boobies, that’s too obvious, or the deep red breasts of the male fregata magnificens which fill up with more air than even Charlie Parker could manage, giving rise to a ceremony of moving pneumatic seduction. And we’d have to carry on with the bright purple eyes of the crabs, or the greyest of grey lava on the island of Santiago, which, if you take a closer look, isn’t grey at all but an iridescent and marbled mix of mineral salts, coagulated by the magma in a galvanic bath that extends over several square miles. And then the glossy, coal black of the iguanas, which can also be citrus yellow or digital rainbows of iridescent scales, like the pixels in a LED wall in Times Square. The colored and flamboyant fruits of the cosmic battle that we call evolution mix with the military camouflage tints of sunhats, or the khaki trousers of the American tourists who often turn up kitted out as if they were about to conquer Mars, with a smidgeon of lipstick though.

But if we’re talking colors, we have to talk about the real surprise star of this landscape: the endemic and scentless whiteness of dried guano. Dung, fertilizer, droppings, here it’s all an arabesque of pure white poo that brazenly carpets bushes and mangroves and stones and everything else. Organic semiotics, traces of life, defecation is no longer an uncomfortable or embarrassing matter to hide but a tool of environmental architecture, the vehicle of crossovers and amalgams. It’s bird poo that transported a lot of the seeds of the plants that now prosper on these asteroid islands for thousands of miles from the mainland; it’s tortoises and their feces that move plants and bacteria along the archipelago. Guano is the pencil that ceaselessly draws an immense collective picture of the landscape. On the island Española, the basalt rocks are like Emmental, pock-marked by the uric acid that birds have released there for millennia, before being decimated by our intensive fishing.

Let’s forget about the colors. Let’s shake off the hierarchy of the senses that makes us slave to our retinas and start again. Let’s go with the smells. Let’s concentrate and close our eyes. We find ourselves enveloped in the breath of sea lions, the Galápagos’ photogenic felines, whose fish-based diet inexorably fills the air that we breathe. Salt, whale bones, coral crumbled into cold and fluffy sand. Here the nose is tickled by minimum variations, fragments, clues, but also violent explosions, like the abundant ammonia fumes that announce the shapeless iguanas huddled up as they try to withhold the warmth of the sun’s rays.

Nostril tourism. If one day someone were to write a topography of smells, geography dictated by the nose, they couldn’t forget the incessant wafts of lamb guts of the stigghiole smoking in the Vucciria market in Palermo. But then again, they couldn’t forget the fragrance of the chopped sugar canes made into a nectar in a penetrating cloud of incense at the kiosks in Mumbai. But, most of all, they really mustn’t leave out the fumigations of palo santo in Quito, the wood fragmented in thousands of tins, burning in a sort of mini fire to the rhythm of the Andes wind.
In the street, under the stairs, in the shops, on every corner, every which where, this sweet, dry fog, soft as butter but also a bit pungent, invades you and doesn’t let you go.

There are striking, excessive, out-of-the-ordinary smells, but my favorite ones are probably the discreet and measured, therefore intangible and truly seductive ones. I’m thinking of the solemn simplicity of the Convento de la Recoleta, again in Quito, which is completed by the scent of its floors and its wood, so well-waxed they feel soft underfoot, using an intense essence that reminds you of physiotherapists’ menthol or an old-time DIY store.

Welcome to the tutti-frutti archipelago, the hotchpotch kingdom with its harlequin flavor. Here everything lives side by side in a confused and untidy mix, an energized blend. On a tiny plot of land, the marriage of opposites: mangroves with cacti, penguins with iguanas, cold- and hot-weather animals having fun together in a mysterious mixed salad. There are some that have arrived from California like the sea lions and some from the south pole, some from the east like the reptiles and some seem to come from cartoons of creation like the hammerhead sharks: even if you see them, you won’t believe them. Every island is a diverse collection of chimeras, a particular genetic training ground, a moral carnival, a joyful accumulation, like a child’s toy basket. If it’s true, and it is true, that the sum is always worth more than its parts, here the aphorism becomes a blinding truth. Individual, unique, alone, Max Stirner, Leibniz and his monad, it’s all stuff that has never arrived here, they’re words that don’t appear in the Galápagos vocabulary. 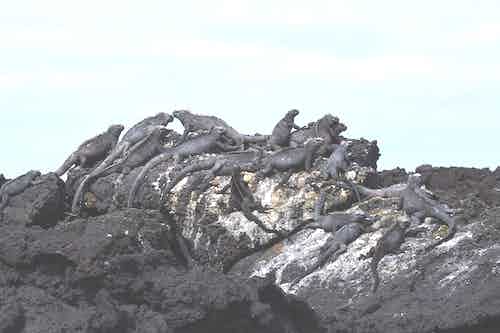 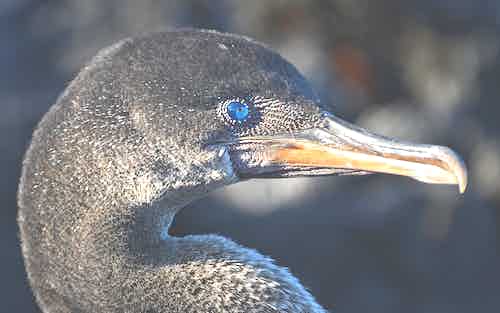 The only thing obeyed here by everything you meet is the law of survival, in a ferocious but placid struggle, no anger, no grudges. These islands are a temple of strict and fragile metamorphosis, as cruel as it is brazen-faced, and therefore necessarily naïve. Don’t think of a nostalgic, technicolor Eden, oh no, here there’s no emotion, empathy is unknown and among all the beasts – us included – there only lurks a pure and destabilizing indifference. This is why it’s terribly easy, but at the same time easily terrible to take photos on the Galápagos, because your prey shows no fear, no suspicion, it doesn’t run off annoyed or claim any privacy: it blatantly ignores you, putting a lid on all human pride.

What can’t be expressed with color becomes a concert in the dark of the jungle night. There’s no escaping the competing decibels in the dark of Amazonia: it’s absolutely impossible to sleep without earplugs. It’s head-spinning noise, a constantly vibrating organism, a primordial voice that wraps you up and whisks you away. The only antidote that comes to mind, to try to resist somehow, or maybe to immerse yourself in the song of these sirens, is to try to describe their voices, timbres and nuances. And so I turn on the computer and gradually, second after second, I try to transcribe every sound that passes me by, a stenographer at the service of this mind-blowing concert.

It’s immediately a sounding of sirens, dull and desperate like a car alarm, straight away joined by the echoes of a thousand digital alarm clocks, which clash with each other, overlapped by the tip-tap of countless typewriters, the old, analogical ones, bashed by millions of agitated fingers. Then we get the hiccups, but they’re so deep they’re thuds echoing in a giant’s throat. Next, electronic loops, like soft arabesques, and then morbid, erotic sucking, and then the dense rhythm of the cicadas’ chirping, solid like a tent. The cries of the bats that swoop in circles like ellipses, the creaking of an old medieval suit of armor, the rusty droning of a rickety, out-of-sync circular saw, the cooing of a syncopated bird with a vocoder, and finally the voice of a muezzin recorded on an old tape and then slowed down millions of times, until it becomes a wave, a massage, a caress.

Someone mumbles, something whistles, creaks, rumbles, buzzes. It’s like being inside a cosmic flipper, distorted and possessed, where they keep adding new balls while the old ones keep on moving, speaking with ancestral charisma. I’d love to have the talent to describe this abundance, but here it’s all overflowing, a flood of voices that are so difficult to circumscribe in words, define, separate from the medium they swim in. The law of the forest is accumulation, its economy indigestion, its rule exaggeration.