Silversea Cruises is proud to showcase this series of impressions about the Galápagos. The series of three pieces also includes A Salad of the Senses and Espanto y Miedo (“musical statues”). All originally appeared in Milan-based Cartography Magazine as a result of its journalists’ trips to the Galápagos, where they sailed on Silver Origin.

Hide and seek. When I can’t see it, it sneaks up to my right, its fur brushing against me. I automatically flinch to the left. It dives down, twists around, shows me its smooth tummy and then, as I look at it, it aims for me, its whiskers ending up just inches from my face. At immense speed, it somersaults, calls its brother, they playfully weave in and out of each other, their backs arching up out of the water, they dive back down, torpedoes in the blue darkness. As I swim, I leave them behind, but the game’s not over. They want to surprise me, they dart alongside me, golden and shining, wrapped up in a cloud of bubbles, their hairy, yellow faces, their flippers held by their sides. When I get out of the water, they jump up disappointed, insist, climb on top of each other, stir up the blueness, measure the distance between the zodiac and the rock like arrows.

What does it mean for me, city dweller, crowded out by stories of people, distracted by routine even on this trip, what does it mean to have been in contact for five long days with the iguanas that graze on the tasty seaweed on the coast, in the cold waters of the Galápagos, on Isabela’s sandy seabed, among the coral of Española? What? They explain to me that these sea lions are different from other ones, here they’re less suspicious of we humans. They get up close, play, because of course we’re something, someone whom they think might play with them. Can they really grasp this from us complex beings? How might they have guessed it? From our arms, our legs, our rubber masks, the wetsuits that vaguely look like a rough version of their coat? Are we children like them? Are we always up for a game? To them the very fact that we swim, we move means that we want to play. The experts tell us that by playing they’re continuously training, to hunt, escape predators, learn all of the sea’s nooks and crannies. Yes, it’s serious play, just like all children’s games, but it’s still a game. It’s the game, the one that counts on all the players understanding: THIS IS A GAME! There are no ifs and buts about it. The sea lion pups want to play and they want to play with us. It’s a game! There are dozens of signs that give it away.  Hide and seek, first of all. If we follow them with our gaze, they do all they can to escape our view to then surprise us from behind. They’re children, they’re not like their father, who instead barks when he can, makes us understand that if we get between him and the coast, he’ll let us know that this is his ground. But they don’t, they’re kids, and so they don’t even need to mark their territory. Instead they open it up as if it were a playing field, their swimming pool, the cubic feet where they go to swim. Maybe the secret behind their thinking that they’re talking to us is in the swimming. Maybe for them our flippers, our swooping arms and legs are the verb and the adjective, and above all the affirmative, our acceptance of the invitation to come and play.

It’ll be hard to forget all this. It was fantastic to discover, to experience. There’s more than one game that can be played in the world, there’s something that goes beyond the silent swirling of the water, the third eyelids, the thick layer of fat, the seabeds where they’ll dive down, among killers and friends, while we drive miles on roads, stop at traffic lights, thinking that everything is so serious. And every so often we’ll think back, amazed that we were invited to play and that we were able to play with them.

Animal noises. The sea lion pups whine as they look for the mammary glands of mothers who are too exhausted to guide them, they complain a bit, but when they’re a bit bigger and they start to play, they make different sounds, clicking, in exclamation, like seals. In the water, the strict fathers growl, claiming their territory. The finches that gave Darwin so much chirp, the thrushes that were his passion whistle, the albatrosses scream, the boobies hit each other on their beaks to duel and mate. In the midst of these sounds, I feel like a European on the Tokyo metro. I’m by myself in the middle of them and I don’t understand their language. I’m a stranger in a world of deep conversations. On the island of Española, a jewel of ecological restoration, I feel like I’m in the middle of a crowd. And the sounds definitely make me feel Melville’s unease, that thrill of the limit, the abyss that separates me from these beings, an abyss that makes me dizzy because it constantly tempts me to believe that I’m almost understanding, that I could almost chirp, growl, whistle, squeak or hiss. I imagine that the Grants, who revolutionized biology through their studies on Darwin’s finches on the island of Daphne Mayor from the 1970s to 90s, really did start to understand the language at a certain point. They frequented and made meticulous, detailed records of the families, generations and changes at every transition, from parents, to children, to grandchildren. 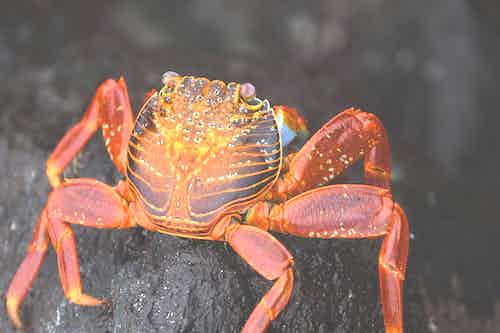 They gave personal, affectionate names to all of them. When they came back after a decade, they recognized the single mature adults, the infants. Peter and Rosemary Grant showed that Darwin was right, and their story also became a magnificent book that won the Pulitzer Prize. Instead Darwin, who was not really a metaphysician at all, had fun. He grabbed the iguanas by the tail and threw them in the sea to watch, amazed, that as they came back to him. These animals had had practically no contact with humans and so they trusted them. To collect the specimens that he needed, all he had to do was whack them over the head and then he could dissect and embalm them. Above all, he was happy that they’d left him on the shore and that his surly fellow scientist Fitzroy had gone off to get supplies with the Beagle. All in all, the 25-year-old Charles’ experience was one of amazement, exploration and riding on the immense tortoises. Melville, on the other hand, observed them, noting that they were quick animals, covering miles to get water and returning to lay and dig a nest for their eggs. Much more active and quicker animals than the iguanas, above all they were fortunate to be inhabitants of a place that enabled them to grow as large as possible and live for hundreds of years. Charles brought one home and it only passed away on 23 June 2006 (Darwin died in 1882). Who knows what reflection on time Hermann Melville would have deduced from that.

Lastly, as the great Guatemalan writer Augusto Monterroso (the one who wrote the shortest story in the history of literature — When He Awoke, the Dinosaur was Still There — wrote about evolution: “Last, I have to warn you that I have no interest in genealogy. Along the British line, we all descend from Darwin”.