Travel is about more than getting from point A to point B. For many, it’s the pursuit of cultures and traditions thought long-lost to the modern world. Journeying to remote island communities and other destinations well off the beaten track is a chance to interact with locals who are determined to protect their age-old civilizations.

There are a surprising number of destinations around the world that are still yet to be discovered by the masses. Close-knit tribes that have never left their remote villages, age-old folk dances complete with flickering torches of fire, ancient cave paintings and vibrant costumes made from leaves and naturally dyed cloth. Read on to learn about eight fascinating, remote cultures that live on in the face of the sweeping tide of modernity that has taken over much of the planet.

The Annette Island Reserve in Alaska is home to the close-knit Metlakatla Indian Community that consists primarily of Tsimshian people as well as other Alaskan Native tribes.

Traditional rock carvings and paintings set the backdrop for visitors to practice the local Sm’algyax language with volunteers at the Haayk Foundation. Woven costumes and colorful hats illuminate a small stage as musicians play sheepskin drums and sing songs about their ancestors. Nearby, the smell of fresh fish roasting over an open fire offers an insight into life in the wilds of Alaska.

The last thing that people expect to find as they approach one of Australia’s most remote stretches of coastline is an open-air art gallery dating back to ancient times. Caves filled with intriguing Wandjina paintings, which are wholly unique to the northern Kimberley, depict man’s respect for nature, birth and death.

Little is known about the native inhabitants of Kimberley, but the extensive cave paintings are thought to symbolize their beliefs that humans were ancient spirits who could start and stop rainfall. Raft Point’s paintings are the most accessible, but rock paintings on nearby Bigge Island show a European sailing ship coming into harbor, and Jar Island is home to 20,000-year-old stick paintings of men chasing beasts for food.

Only the most adventurous of travelers make it to the Russian Far East. The region’s isolation is perhaps why the area around Okhotsk has been able to preserve its local culture and traditions. Small settlements are home to native inhabitants of the remote wilds of Russia, where locals wear handmade animal skin hats with intricate patterns made with natural plant dyes.

The indigenous people of Okhotsk are known as the Koryaks, and they speak the endangered Koryak language. As traditional reindeer herders, it is a common sight to see hardy local men wearing thick reindeer skin coats during the winter months, as they lead hundreds of reindeer through the snow-covered fields of Okhotsk to new grazing grounds.

The Atacama Salt Flats in Chile is one of the driest places on earth, but according to Expedition Expert Claire Allum, who specializes in Anthropology, humans have thrived there for millennia. There is evidence of small villages on the salt flats dating back to the eighth century B.C., where villagers collected shellfish and fished for food. The ancient Chinchorro people, whose descendants still inhabit the area, were the first civilization in the world to mummify the dead.

Allum describes the small highland town of San Pedro de Atacama. “It’s a quaint town of square adobe buildings and whitewashed churches,” she says. “The town was originally built by the Atacameños around an oasis in this puna desert.” Today, visitors can still see the old pottery and stonework that was left behind.

As an active volcanic island in the Vanuatu archipelago, Ambrym is indeed a mysterious destination to visit. It’s known locally as the island of magic because the locals believe that some men and women possess powers to heal or curse others. On Ambrym, spirits are an essential part of everyday life.

Travelers are often greeted by a rare spectacle— locals performing the rhythmic ‘Rom’ dance. Two different groups appear from the forests simultaneously. Dancers, hidden behind banana leaf costumes and wooden masks perform in straight lines, while musicians advance in a circular group. “If there has been no rain, the whole scene takes on a magical aura,” explains Christian Walter, an Expedition Content Specialist for Silversea Cruises. “The musicians and dancers will disappear in a cloud of dust.”

The Solomon Islands are one of the least visited destinations on earth, and the island of Santa Ana (also known as Owaraha) located in the southeast part of the island chain is particularly remote. Santa Ana is renowned for its unique wooden carvings based on local stories and legends that are used in agriculture and fishing. It’s a tradition that dates back generations. 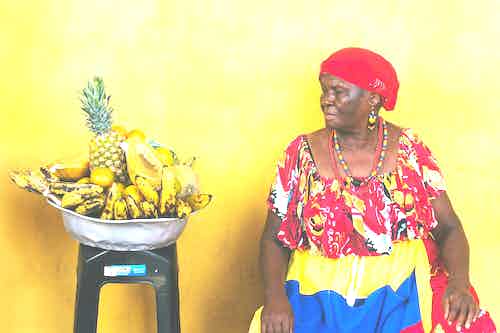 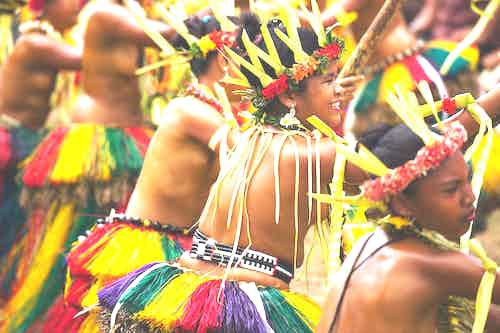 Christian Walter recalls the moment their Zodiac landed on the beach on Santa Ana and warriors came forward to greet the visitors. “Depending on the occasion, all of the local dignitaries will come to the beach to personally welcome guests,” he says. “Otherwise guests will be led to an area to watch local villagers performing traditional singing and tribal dancing.”

Located just east of New Ireland, Tatau is part of the Tabar Group of islands in Papua New Guinea. The outstanding cultural experience on offer here is the vibrant face and body painting and traditional dancing that the locals showcase for visiting travelers. Guests are treated to performances by men and women whose faces are painted in vibrant yellows, whites, reds and greens, some with large piercings through their ears, lips, and noses and wearing natural leaf and grass skirts. They also open the Malangan house, which houses ancient wooden masks that were used in ceremonies to send the spirits of the deceased from this world into the realm of the dead.

Yap Island is home to the Yapese people, a Micronesian ethnic group that has been influenced over centuries by the Spanish, Japanese, Germans and Americans.

The Yapese people, however, boast many cultural traditions unique to their part of Micronesia, and the island is full of outstanding attractions. Christian Walter says, “It has…traditional houses, stone paths across the island, artifacts from World War II, and underwater wonders like sharks and manta rays.”

Yap is well-known for its Rai stone money— large stone discs with diameters of up to 12 feet (about 366 centimeters) in diameter that were imported from Palau, some 450 kilometres further south, and used as payment. In fact, they’re still used in some transactions today.

As for the island’s thatched houses, they’re divided between tibnaw family homes, faluw men’s houses and p’ebay community halls where dances and community meetings are held. Permission is needed for visitors to enter the houses. Singular experiences like these are only possible when visiting the most far-flung destinations on Earth.