Aerial photography offers a unique lens on a destination. There’s a compelling quality to a landscape when seen from above, regardless of its form. While on the ground, you’ll see stunning vistas along the horizon, but it’s only when up in the air that all the colors combine and create a large piece of earthy artwork.

As one of Silversea’s expert photographers, Lucia Griggi regularly admires this unique kind of beauty, getting above the clouds during shore experiences around the world. “I enjoy shooting aerial photography in the Andes Mountains because you have all these glacial lakes,” she says. “It’s really beautiful to shoot down on that, with pieces of ice punctuating the masses of water. The blue pierces through that natural landscape of reds, greens and more earthy colors. I love anywhere you get glacial runoff with gorgeous colors and lines.”

If you’re in the Andes, on an Alaskan cruise or in another destination with a varied, colorful landscape, you can also produce the same stunning pictures Griggi captures from high above the ground. Here, she shares her five top tips for getting the best shots while on a helicopter or plane flight.

What you bring with you on your trip will depend on how exactly you’re going to fly. In a helicopter, Griggi suggests using two cameras—one with a longer lens and one with a wide-angle lens. For a plane, bring one camera and a camera bag with the different lenses you want to use. You can swap them out as needed during the flight. You won’t need any other type of equipment—you and your camera are more than sufficient.

The very last thing you’d want to do while in-flight is lose your camera. It’s not likely to happen on a plane because you’re enclosed, but helicopters can pose a challenge. “You have to be careful, especially if there are open doors,” says Griggi. “And, if possible, you want to have an open-door helicopter if you’re shooting.”

Don’t forget to use a camera strap and keep it around your neck at all times. The same applies to point-and-shoots—have them on a leash. If your cameras aren’t attached to you, you won’t be able to take them on the flight. “You manage the cameras and, safely, you lean out slightly and shoot down for the aerial shot—a bird’s-eye view,” Griggi explains.

This one’s easy. Unless someone is blocking your view, every seat is the best seat. As long as you’ve got access to a window or an open helicopter door, you’ll be able to get outstanding landscape shots. Some spots are better than others, though. The back of a helicopter, for instance, has more access to both sides of the landscape, and the front of a small prop plane (next to the pilot) could have a window that opens, from which you can shoot. Consider this in advance to photograph your desired aerial views, particularly if there is a geographical feature that you’d like to capture.

4. Use a Fast Shutter Speed

You won’t need to fight against any vibration on the relatively smooth plane and helicopter tours. Still, you’ll need to manage a landscape that is always moving. Griggi recommends using a shutter speed of 1200 or higher because faster speeds are best for action shots.

If it’s a sunny day, aim for an aperture of 5 or 6. Ultimately, however, the aperture doesn’t matter too much. “Sometimes, I shoot pretty open at 2.8 because the first point of contact is on the ground,” Griggi says. “And it’s quite far away, so aperture doesn’t matter as much. Shutter speed is more important to enable a fast enough shot.” 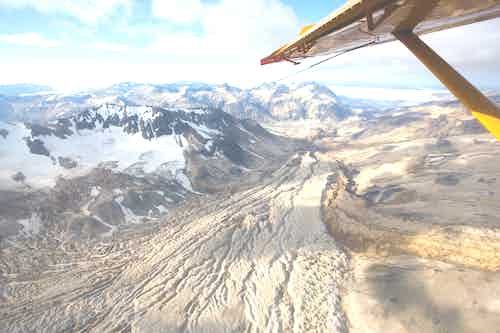 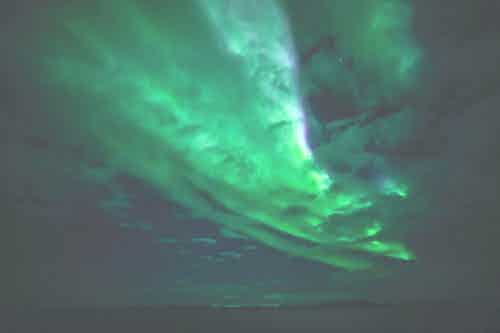 Aerial photography can become quite bland without variation in the image style, so diversity your shots throughout the flight. Griggi suggests a combination of shooting straight down, shooting the horizon, taking some wide shots, and taking some reference shots. If you’re looking for more artistic options, she recommends including the wing of the plane in your picture for an environmental perspective. Or, shoot the pilot from behind with the landscape showing through the cockpit window. Some of the best shots occur when the landscape itself, such as Iceland’s braided rivers, weave throughout the image, acting as an artistic medium.