Some feats of human engineering require experience instead of mere observation. Take the airplane. Staring at a plane or flying at 30,000 feet imparts vastly different understandings of flight. The same idea applies to the Panama Canal: It’s marvel to witness. but it begs to be experienced.

Since the canal’s opening in 1914, passenger ships have regularly traversed the 40-mile manmade waterway, which connects the Atlantic and Pacific oceans through the Isthmus of Panama. After entering the Panama Canal, passengers can expect a full day of locks, which raise and lower ships using a controlled flow of water. The process takes 10 to 12 hours and also depends on canal traffic.

A project completed in 2016 doubled the canal’s capacity and made room for “neo-Panamax” ships, which can accommodate about 4,000 passengers.

Panama Canal-crossers have two main issues to consider before booking: how much time they can spend and the itinerary that suits their vacation desires. 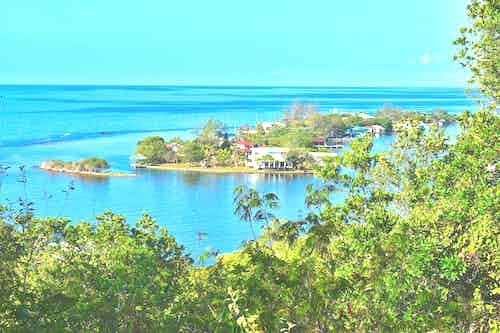 This Q&A will help you narrow the numerous options for exploring the Panama Canal, considered one of the Seven Wonders of the Modern World as designated by the American Society of Civil Engineers.

Which direction is better?

Both crossings offer a similar experience, so it depends more on where you would like to end up. If sailing toward home appeals to you, choose a cruise that disembarks on your closest coast; Panama Canal crossings can begin or end in San Francisco, New York or Fort Lauderdale, Fla.

If proximity to your vacation’s end isn’t a concern, focus on the ports along the way. Would you like extended time in Peru? How about Barbados? Note that if your itinerary heads from the Pacific to the Atlantic, you gain hours rather than losing them.

What time of year is best?

Panama Canal cruises depart September to April. The fall months are rainy season­­—November is typically the wettest month—but that means the rainforest flora are in full bloom.

Sunnier weather begins in December, and February is considered the driest month in Panama. Temperatures are typically in the 70s and 80s Fahrenheit year round, but prepare for some humidity.

Atlantic and Pacific hurricane seasons usually end in November, a consideration if your itinerary spends much time in the Caribbean or the West Coast.

Time is a concern. How can I see it all in less than two weeks?

Not everyone has several weeks to spend on a vacation, but the good news is that many Panama Canal itineraries including a crossing—even an overnight port­–—of less than two weeks if you’re willing to fly.

For example, starting in Bridgetown, Barbados, guests call on nine ports in eight countries in 12 nights. The crossing comes on Day 10 and is a slow-moving respite after an overnight in lively Cartagena, Colombia. This voyage ends in Guayaquil, Ecuador, a jumping-off point for the Galápagos if you don’t need to head straight home.

Being short on time doesn’t mean you’ll be short on experiences; you will complete a full transit of the Panama Canal besides taking shore tours that will include snorkeling and hiking St. Vincent or doing yoga in a park in Cartagena. This itinerary even features three sea days, which ensure relaxation.

What if I don’t want to deal with passport control lines at the airport?

Of course this depends on where you live, but if home base is within the U.S., you’ll find some Panama Canal cruise options that help you avoid an international flight home. If you pass through Customs and passport control at the port, you won’t have to worry about the hassle once you get to a domestic, U.S.-based airport.

If Florida is home or close to it, you can begin your Panama Canal adventure in Lima, Peru.

A 16-day Lima-to-Fort-Lauderdale sailing offers time in South and Central America and five sea days to relax. If you’d rather reach your cruise vacation as soon as possible, the itinerary is offered in reverse, beginning in Fort Lauderdale and ending in Lima, from which an excursion to Peru’s Machu Picchu is possible.

Either direction, you’ll be treated to trip of Peru’s Chan Chan ruins, a UNESCO World Heritage Site; a visit to Panama City; deep-sea fishing or Maya ruins in Cozumel, Mexico; and the chance to explore the rainforest of Costa Rica.

Can I find iconic destination opportunities and use just domestic flights?

If you want to end up on the West Coast at the end of your Panama Canal cruise, a 19-day Fort Lauderdale-to-San Francisco sailing eliminates international flights on either end of your journey. This trip provides 11 days at sea; port days are spent exploring Colombia, Costa Rica and Mexico, plus a day spent in Los Angeles. If time in Baja California and Beverly Hills appeals, book this Panama Canal itinerary. On the flip side, if you prefer to reduce your time at sea, consider a more port-intensive sailing.

A 23-day Fort-Lauderdale-to-Vancouver-British-Columbia cruise is well suited for West Coast Canadians or maybe Seattleites looking for a Panama Canal crossing as well as anyone who might want to tack on yet another trip onto their itinerary.

And, after completing an epic trip through the Panama Canal that includes time in South America and even a stop in Guatemala, why not embark on an Alaska adventure? This Panama Canal itinerary ends in Vancouver in May just as Alaska cruise season is kicking off. Hop from one ship to another and check the Last Frontier off your travel list. Alaska cruises from Vancouver typically end in Seward, Alaska, one week later and include transfers to Anchorage.

I’d like to focus on South America. What’s the best way to do that?

Cross the Panama Canal after two days in Cartagena and emerge on the other side in Manta, Ecuador, the second-largest seaport in the country.

On an 18-day cruise from Bridgetown to Valparaíso, Chile, you’ll travel along the west coast of South America, spending time in the Southern Caribbean before your Panama Canal transit. Three days in Peru are followed by two days in Chile. The port of Arica is the country’s northernmost city and part of the Atacama Desert, said to be the world’s most arid desert. End the journey in Valparaíso, one of the homes of the late Nobel Prize-winning poet Pablo Neruda that’s now a museum. Visitors who appreciate the arts, culture and good wine will enjoy time in this Chilean city, also known for its cultivation of the grape brandy called Pisco.

How can I do some island hopping?

Panama Canal crossings will find you in the Caribbean, which means idyllic islands where you can dig your toes into the sand. Nineteen nations on offer during a 27-day sailing from Bridgetown to Lima.

Included in that count are 14 island ports of call. Experience British, French, Dutch and even American cultural influences as you sail from Barbados to Martinique, then on to the Netherlands Antilles, stopping  in Puerto Rico and the U.S. Virgin Islands.

After an all-you-can-absorb island extravaganza, sail toward Colombia and ultimately Panama for your canal crossing after three weeks of Caribbean cruising. Cap off your holiday with time in Ecuador and Peru, including Guayaquil and Lima.

Island-obsessed East Coasters should consider a departure from New York on a monthlong Panama Canal cruise to Lima, which includes a dozen island nations.

Just four days after departure from brisk New York, guests will have three full days in Hamilton, Bermuda — a mini-vacation within a vacation. Then the resort life of St. Barts and Antigua beckons, as do the white sands and natural treasures of St. Lucia, Grenada and Barbados.

Is there a way to do the Panama Canal and explore Patagonia?

Ushuaia, Argentina, is typically a departure point for Antarctica; the port is just 620 miles from the White Continent, or about two days by ship. You can uncover some of this stunning region on a 32-day Panama Canal sailing from Fort Lauderdale to Buenos Aires, Argentina.

Patagonia,  often referred to as the Land of Fire and Ice, features stunning landscapes as diverse as volcanoes and glaciers. Guests onboard a sailing also can cruise the Chilean Fiords and the Garibaldi Fiord and Glacier of Chile’s remote Alberto de Agostini National Park. Eight days in Chile include a stop in Punta Arenas, often referred to as the End of the World.

An overnight in Ushuaia gives passengers with the chance to see the penguins, sea lions, birds, and other native wildlife. A visit to the 150,000-acre Tierra del Fuego National Park should yield memorable photos before sailing on toward this voyage’s final destination, the pulsing city of Buenos Aires. Other perks of this trip include a call in Pisco, Peru, where visitors can spot Peruvian boobies and other rare birds while enjoying an uber-authentic Pisco sour cocktail.

How do I spend time in both North and South America?

Choice is a luxury for many, but as cruisers know, you don’t have to choose between itineraries if you have the time to sail; often, you can see distinct regions of the world as part of the same voyage. For example, those who have about six weeks can take a Canada/New England cruise and a sailing through South America without unpacking more than once.

A 41-day itinerary from Quebec City, Canada, to Valparaíso keeps guests occupied with 31 ports across 16 countries.

Begin with time in Quebec which includes scenic sailing of the Saguenay River. Enjoy picturesque walking tours in the autumn weather, where whale sightings and lighthouse beacons are commonplace. Prince Edward Island is home to famed shellfish and fictional protagonist Anne of Green Gables. Two days in Nova Scotia precede time in New England, including Bar Harbor, Maine; Boston; and Newport, R.I. You’ll sail past Cape Cod, Mass., with a hot toddy in hand, and four days later you’ll be in Bermuda, which includes time in Hamilton and St. George’s.

Eight consecutive islands make up the middle of this grand sailing, including the less-touristed island of Guadeloupe. After an overnight in Cartagena, the Panama Canal will come into view after one month of sailing. Six days in South American ports, focusing on Peru and Chile, provide a bookend to the voyage.

What if I have all the time in the world?

If you have the funds and freedom to take a world cruise, do so. Because of their comprehensive route, many world cruises will pass through the Panama Canal on a circumnavigation of the globe. A Grand South American 70-day world cruise departs Fort Lauderdale and returns in 10 weeks after 23 countries and 36 ports of call.

The cruise, the equivalent of five voyages,  connects Fort Lauderdale to Lima; Lima to Buenos Aires; Buenos Aires to Rio de Janeiro, Brazil; Rio to Bridgetown; and Bridgetown back to Fort Lauderdale. Highlights of this sailing, apart from the Panama Canal crossing, include an overnight in Panama; a visit to the Falkland Islands, home to spectacular penguin colonies; eight days in Brazil with an overnight in Rio; a call in French Guiana; and the chance to sail Bequia (part of St. Vincent and the Grenadines) on a catamaran.